ISTANBUL (Turkey) - Alba Torrens may have equaled the modern-era record for EuroLeague Women titles with a sixth winners' medal, but is already looking forward to extending her impressive haul.

Reflecting on drawing level with Diana Taurasi and Natalia Vieru who also have six EuroLeague Women titles on the honors board, the UMMC Ekaterinburg ace from Spain isn't finished yet.

"I will celebrate this one for now, but yes, I'll be here for more," smiled Torrens.

"I am so happy for this medal because in this moment, I can think about how we have come a long way to get to where we are."

Her team's 78-68 success in Istanbul came against Perfumerias Avenida, the club that Torrens won her very first title with exactly 10 years ago, before also going on to lift the silverware in 2014 with Galatasaray, prior to her four UMMC medals.

The Spaniard took the time to pay tribute to her former club and highlighted the talent that was on show at this season's edition, with UMMC having had to work hard to squeeze past Fenerbahce Oznur Kablo.

She stated: "We knew it would be tough as we would be playing against the best teams of the whole season.

"This is not because other people were saying it, but because we knew that the teams would step out and show it. Both the Semi-Finals and the Final showed the high level of EuroLeague Women.

"I am also very proud of my team because that is exactly how we played - as a team. That is how we have been all season," concluded Torrens.

Players with most titles in modern-era EuroLeague Women 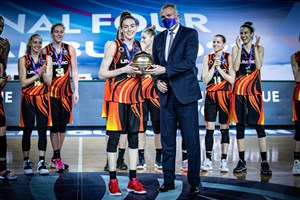