MUNICH (Germany) - The start of the EuroLeague Women Regular Season is almost here and so it's time to check out our first set of Power Rankings for the 2020-21 campaign.

We have taken into account the roster changes and of course the luck of the draw as we map out who looks destined for the Quarter-Finals, then Final Four and ultimately the title.

By way of a reminder, there are 16 teams participating in the Regular Season, with the first hub being played from December 1-4. Group A and B will take place in Istanbul (TUR), with Group C based in Girona (ESP) and Group D in Sopron (HUN).

Meanwhile in order to protect the health and guarantee the safety of players, coaches and officials, as well as to safeguard a fair competition, and to properly organize game operations, all other phases of the competition, including the Quarter-Finals and the Final Four, will also be conducted in single venue hubs. 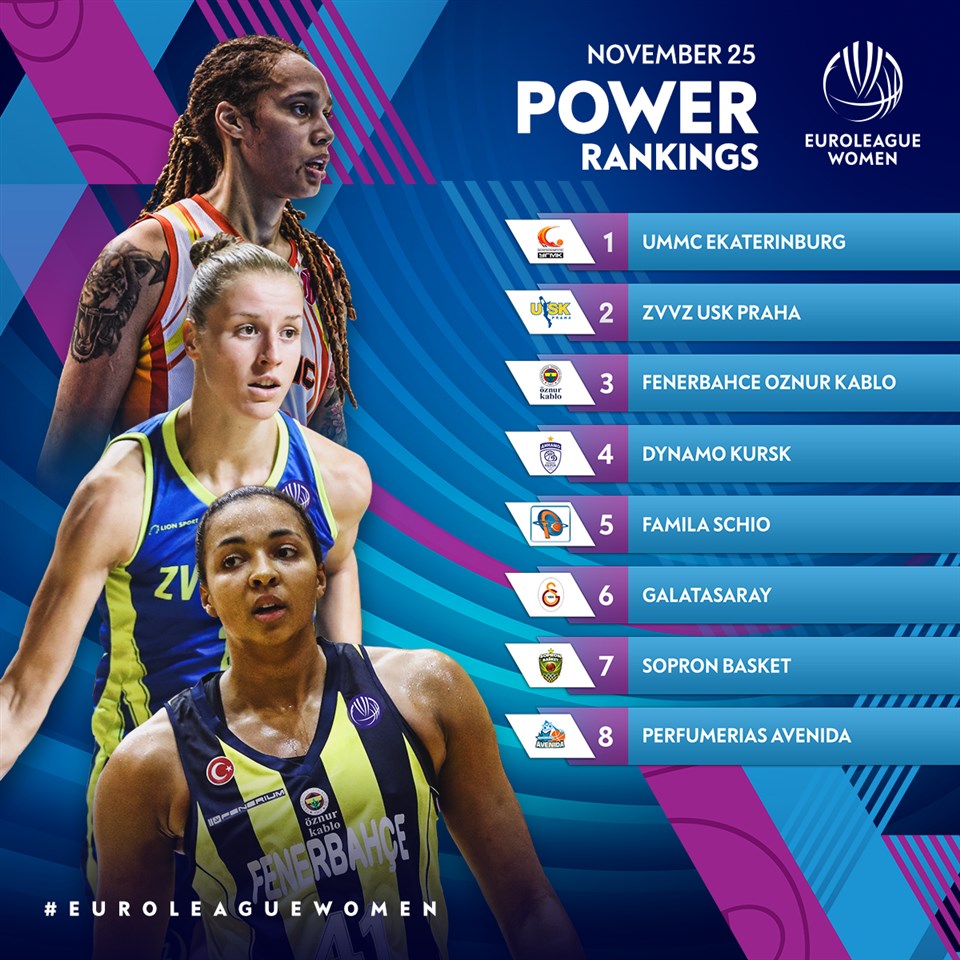 They looked destined to move towards another title last season before the campaign was derailed by the coronavirus. Little has changed. There is a top coach in Miguel Mendez, a star-laden roster that has barely changed (so you can add the much underrated continuity to the mix as well), multiple game-winners in waiting. A list that includes the likes of Brittney Griner, Emma Meesseman, Breanna Stewart, Courtney Vandersloot and Alba Torrens means UMMC are by far, the team to beat.

Another club with pretty much the same dominant roster, in fact maybe an even better one with Croatian scoring machine Ivana Dojkic now on board, ZVVZ USK Praha are stacked. Even the young guns like Veronika Vorackova look like stepping up to support the leading performers and not least the irrepressible Alyssa Thomas and Brionna Jones. With legendary playcaller Natalia Hejkova at the helm, what is not to love? On paper at least, they look like Final Four locks.

Perhaps more than any other club, Fenerbahce had most reason to be disappointed by last season being cut short. The excellent Victor Lapena had his team on course for an overdue Final Four return. Can they get back on board in that venture? Probably. They lost the phenomenal Alina Iagupova but the new signings of Satou Sabally, Kayla McBride, Kia Vaughn, Kristine Vitola and Jasmine Thomas look very exciting. Throw in Cecilia Zandalasini, returning for a third year and the signs are good.

Last season was bit of a mess. The chemistry simply wasn't there, despite a decent looking roster. Pushing the reset button in the off-season, challenging for the title looks realistic again. New faces Steph Mavunga, Amanda Zahui and Arike Ogunbowale will get fans on the edge of their seats, and they could have a whole new starting five with Raisa Musina and Alex Bentley coming in too. The big question is whether head coach Elena Shakirova can deliver, possessing no track record of big success? 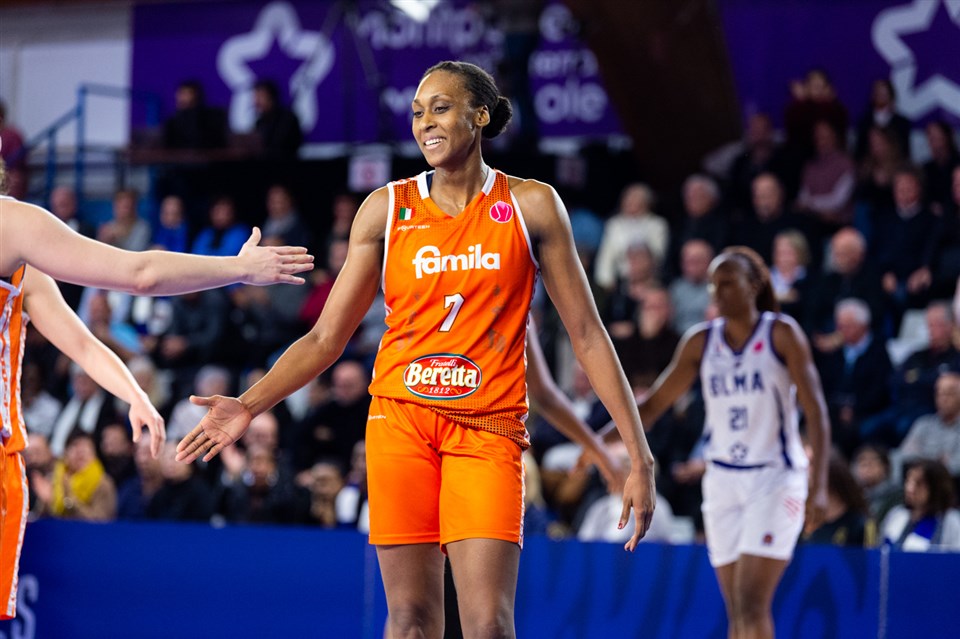 We feel you. Maybe a little high, right? Possibly. But with UMMC likely top spot and TTT Riga looking destined for bottom, Schio should maybe edge out Girona in the race for second place in the group and the Quarter-Finals. When you have the experience of Pierre Vincent and Sandrine Gruda, you already have a super foundation. By adding ore quality like Canadian Natalie Achonwa and most recently Belgian Cats' standout Kim Mestdagh, it feels like Schio are a club on the rise.

Is Top 6 being too generous to the 2014 champions? Maybe. It's such an even looking group, things could go very well (like in the Turkish League so far) or the wheels could come off. Importantly, Courtney Williams is on fire, while other arrivals like Mercedes Russell have settled well. With Anete Steinberga an absolute rock inside and now joined by Quanitra Hollingsworth, the ambitions should be a run towards Final Four. We're just disappointed Bria Hartley will sit out with an ACL injury.

Sopron could make waves again this season, although a repeat of making the Final Four like 2018 and 2019 is a tall order. But their starting five really looks like it could do some damage to opponents if they click as hoped. Gabby Williams is a big arrival, while the recent decision to land Glory Johnson gives them an added physicality. Jelena Brooks will do what she does so well as always, while we never forget the unsung heroes like Tina Jovanovic too. If we were loyal Sopron fans, we'd have optimism! 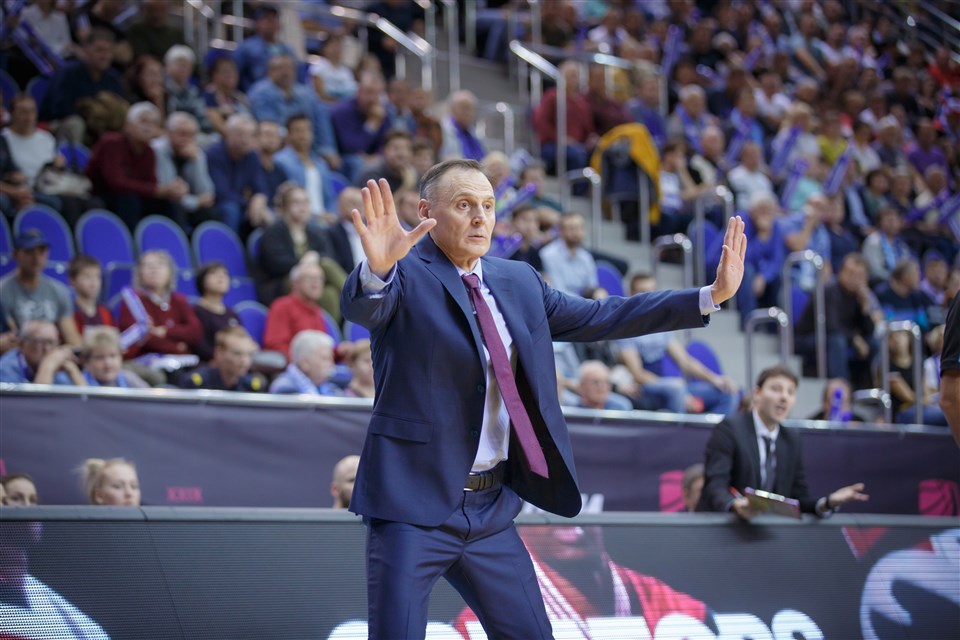 The whole of Salamanca is still upset after not competing in the competition last year for the first time in memory. It hurt a lot. They're back and with the expert hand of Roberto Iniguez to guide them, second place in their group and the Quarter-Finals looks realistic. No club will miss home fans quite as much, but a great mix of talent and experience should see them advance, including Silvia Dominguez, the Samuelson sisters and Marica Gajic - a baller who needs EuroLeague Women and vice-versa.

Before you contact our complaints department, let us explain. Yes, something potentially great is being built by Tony Parker at the club and they may have made Final Four last season before the premature season end. But there's no way we can go against the legendary Natalia Hejkova of Praha or Victor Lapena at Fenerbahce. Even if Lyon have great hopes and some special players like Marine Johannes, we think the draw has been very unkind. Plus, they didn't keep Julie Allemand. Say what?

Not inside the Top 8, but they could certainly topple Schio and we were tempted to swap places with their Italian rivals. It also feels dangerous and ridiculous to write off a team with the amazing Sonja Vasic in it. Plus plenty of other good players, including backcourt and wing options such as Laia Palau, Frida Eldebrink and Chelsea Gray. But the controversial decision to fire playcaller Eric Suris recently might have tipped the balance towards Schio - at least until we see how new coach Alfred Julbe does. 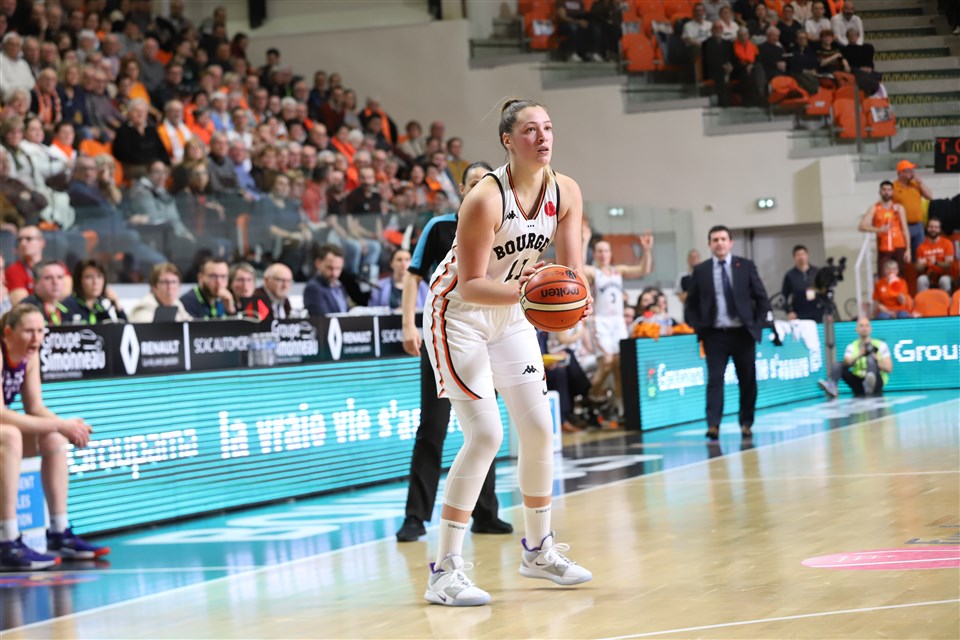 How dare we put a club with such glorious tradition down in 11th? However, they're in the most cut-throat group and we don't quite see them making the top two. They'll miss teenager Iliana Rupert who got an injury and had been growing in influence, they don't have a lot of dynamism or scoring depth. On the plus side, Alexia Chartereau is super and they're as physically tough and as experienced as anyone with veterans like Elin Eldebrink, Elodie Godin, Marissa Coleman and Isabelle Yacoubou.

They got the job done comprehensively in the Qualifiers against DVTK Miskolc to make history and book this first Regular Season outing. With added momentum and belief behind them, they must have no fear for what the group holds. With Clarissa Dos Santos, Milica Jovanovic and Erica Wheeler, they have some quality operators to rely on. They can certainly push Nadezhda and might surprise Avenida too. But, they must steer clear of injuries to think about advancing out of the group.

Honestly, we're not trying to rain on the parade of the returning legend Celine Dumerc to the competition. Or spoil the opening party of the newcomers, who will also benefit from the considerable coup of bringing back Valeriane Vukosavljevic. It's just that despite a good overall start domestically and some super players, they maybe don't have the extended rotation of others in a fierce group. Nevertheless, they're still capable of making this power ranking look ridiculous - it's so tight looking.

If they can win their duel against Izmit Belediyespor, they'll effectively propel themselves up the Power Rankings. Right now, they look more likely to be edged out. Their performances in the Russian League have been lukewarm. Even if we do love the perimeter options in Anastasiia Shilova and Natalia Zhedik, plus being intrigued as to how well Monique Billings can do, along with Maros Kovacik being just the kind of coach to prove us wrong, we still can't see them being in a top two spot in the group! 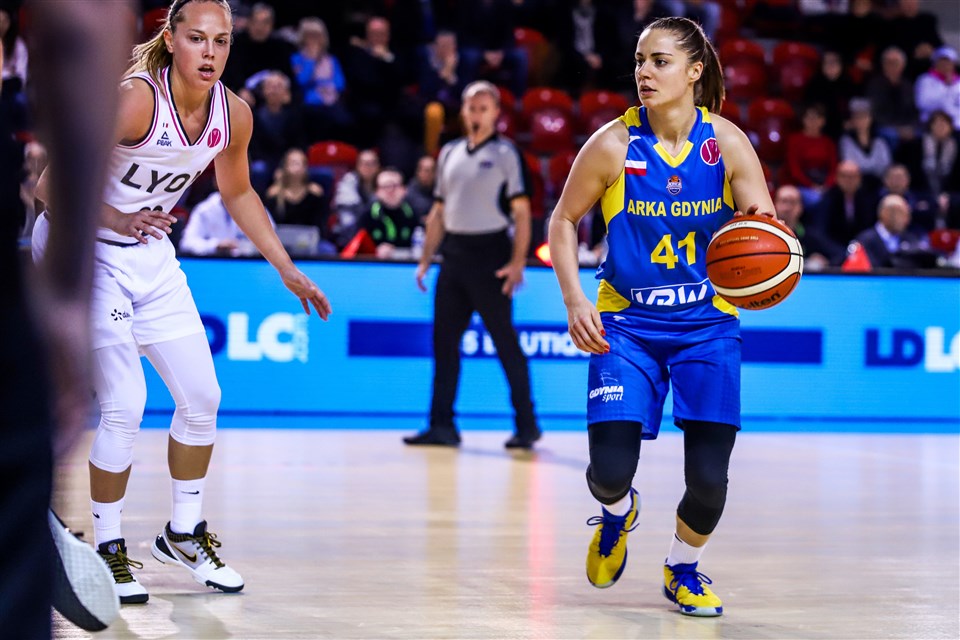 It's true Arka Gdynia probably didn't get enough respect for their performances last year. They were unlucky to lose a few close ones. Being in the penultimate position of these Power Rankings won't help with that we know, but has a draw ever been as cruel? They'll face Fenerbahce, ZVVZ USK Praha and LDLC ASVEL Feminin. Yes, they have class in Slovakia leader Barbora Balintova, plus a warrior in new arrival Artemis Spanou, but it looks like mission impossible to get out of a group like this!

When TTT Riga beat the mighty UMMC last year, nobody saw it coming, so anything is possible. But it's going to be a rough ride in a group with Ekaterinburg in it again - as well as Schio and Girona. Somebody has to be bottom of the Power Rankings and with that tough draw, it's Riga. They do have quality with Binta Drammeh and Megan Huff for example, but they just don't have the depth of their rivals. Unless they shoot the lights out almost every game, the post-season feels like it can only be a dream. 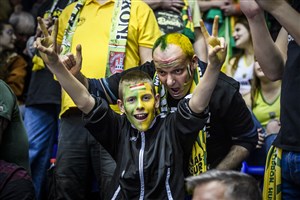 Team generator: Which EuroLeague Women club should I support? 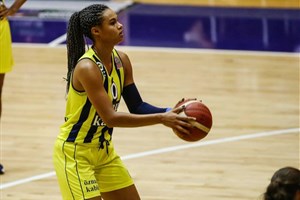