In a dramatic conclusion to the showpiece game, it was fitting that Spanish teenager Raquel Carrera sunk the winning free-throws ahead of her compatriot Queralt Casas being crowned the Final Four MVP.

Turning point: It looked like Yvonne Anderson had won Reyer Venezia a maiden title when she brilliantly executed a give-and-go with her teammate Gintare Petronyte with 1.2 seconds remaining to hand the Italians a one-point advantage. However, in a play that will be remembered for years, Anderson was then caught out and ended up fouling Carrera under the basket on the last play of the contest and she took full advantage by showing nerves of steel to sink both foul shots.

Game heroes: Casas was superb throughout and netted 20 points, with Bec Allen and Celeste Trahan-Davis combining in the frontcourt for 16 and 15 points respectively. Meanwhile Carrera made a string of big plays that belied her tender years, not least her decisive last-second intervention which took her to 13 points.

Bottom line: Both teams provided the kind of exciting and dramatic season finale that fans craved in a game that will live long in the memory. It will be tough for Reyer Venezia to bounce back from snatching defeat from the jaws of victory. They will be particularly upset that they actually managed to hold the best three-point shooting team in the competition to 3 of 14 but still couldn't pull out the win. Meanwhile, Valencia may count themselves fortunate to have escaped, but won't care because they managed to compose themselves and got the job done in the most unlikely fashion to make history.

They said: "It feels terrible because we had the game in our hands. Just one second in life seems so small and fast, but in a game like this when it is only one point, it can still change an entire basketball game." Reyer Venezia forward, Elisa Penna.

"I think that it was more about the full 40 minutes of work that we did on court (not only the end). I am excited that we won and now I will enjoy it. I also want to thank the fans who could not be here for all their support." Valencia Basket forward, Raquel Carrera. 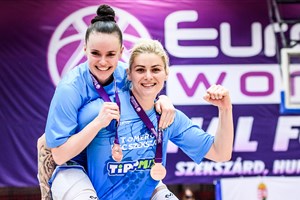