MUNICH (Germany) - The EuroCup Women Quarter-Finals concluded on Thursday night, leaving four teams in the race for the coveted title.

BLMA already advanced on Wednesday after completing the double over fellow French side Carolo Basket. It is the first time the club from Montpellier have reached the Semi-Finals of an international competition.

They were joined on Thursday by Spar Citylift Girona, Famila Schio and Nadezhda.

Spar Citylift Girona eliminated debutantes Lyon ASVEL Feminin to also make their first-ever EuroCup Women Semi-Finals, topping their result from last year when they were halted in the Quarter-Finals.

Famila Schio are back in the last four for the first time since winning the title in 2008. The Italians overturned their first-leg deficit with a dramatic win at Cukurova Basketbol, ending the undefeated run of the Turkish competition newcomers. It is the first time since 2011 that Turkey will not be represented in the EuroCup Women Semi-Finals.

Nadezhda followed up their first-leg triumph with a win on the road, edging out Perfumerias Avenida after a remarkable fourth-quarter comeback. The Russian side will be looking for their first European trophy, having finished runners-up in EuroCup Women 2010 and EuroLeague Women 2016.

The Semi-Final pairings are as follows:

The Semi-Finals will follow the same home-and-away format, with the teams listed first playing the return leg at home. The two legs are scheduled for March 21 and 28.

The season will conclude with the home-and-away Finals, set to take place on April 3 and 10.

Nadezhda and BLMA to meet in EuroCup Women Final 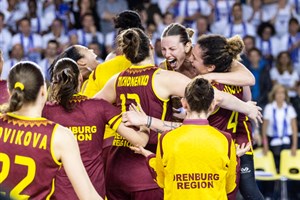 Nadezhda and BLMA to meet in EuroCup Women Final