RIGA (Latvia) - Bulgaria basketball fans don't have a lot of signature wins to fall back on in the past. But they now have a history-making victory to remember for years as Bulgaria beat Latvia to end a decade-long drought and qualify for FIBA EuroBasket 2022.

Bulgaria will return to the continental showcase for the first time since 2011 after surviving a thrilling showdown with home side Latvia 66-65 in a massive moment in the basketball legacy for the country.

"For sure, this is the greatest victory in my career as a coach. I have had a lot of victories, championships, cups, qualification to EuroBaskets, but this was the greatest. It was very hard against a team like Latvia and in Riga," said Rosen Barchovski, who was the head coach for Bulgaria's last two EuroBasket appearances in 2005 and 2011.

"For every player who plays in a forum like this, it's a really good chance to face the best players in the world. It will be great to play again at EuroBasket to show that Bulgarian basketball is alive," said Aleksandar Yanev, who was 21 years old when he played at the EuroBasket 2011 in Lithuania. "Everybody knows that Bulgarian players are not famous in Europe, and we needed this to change."

Yanev and Chavdar Kostov are the only two holdovers from the 2011 team, and both of them have regularly played for Bulgaria in qualifiers for big events since then. And they made sure the younger generations of Bulgarian players knew what was on the line in Riga.

"We told them, for us and for everybody, it's a big chance to be at EuroBasket. For the young players it will be great to play against the best teams in Europe," Yanev said.

Barchovski emphasized that timing was another factor that made the game versus Latvia that much more important.

"This is a big, big success. We missed 10 years of EuroBaskets. And if we had lost the game, the next EuroBasket would be in 2025. And all of these generations would not play in a EuroBasket. Because of this, it was very, very important," the coach said.

Part of the success over Latvia dates back to September 2018 in the FIBA Basketball World Cup 2019 European Qualifiers when Bulgaria beat France 74-68 at home. Five of the players from the team in Riga were victorious nearly two and a half years ago, including Yanev. And the win over France gave them the added confidence.

"Nobody believed in us before that game. Nobody believed that we could beat that team. They came to Bulgaria with stars. But again, we fought, we fought for every ball. We showed that we have potential. Everybody remembers that great win against France," Yanev said.

"It was history for sure. To beat France is always a great job," said Barchovski, who was not the coach at the time but Lubomir Minchev, his assistant coach from EuroBaskets 2005 and 2011.

But Yanev said the win over Latvia holds even more weight.

"I think the win against Latvia was more emotional than the one against France. This is another win we will remember for five or 10 years," he said.

While Bulgaria finished their qualification campaign with a loss to Bosnia and Herzegovina, the country can now look ahead to next summer - and big dreams.

"If everybody is healthy and we have a full roster we can do something great," Yanev said. "We don't have any pressure because we know that we are playing against great teams. I think if we play our game with freedom and ease we can surprise more good teams."

And Bulgarian fans might have more wins to remember for years to come. 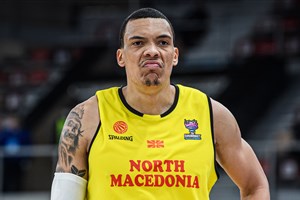 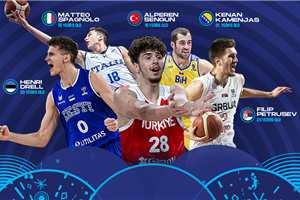