PERM (Russia) - North Macedonia picked up their first win of the Qualifiers, helping them stay alive in the hunt for FIBA EuroBasket 2022. Now they have to play the waiting game with Estonia in Group B, because an 87-78 win over Italy could be futile if other results don't go North Macedonia's way.

Estonia own a 9-point lead over North Macedonia from their first matchup, meaning Estonia could advance with a win over Russia or by winning the head-to-head tie-braker against North Macedonia on Monday.

Turning point: Italy started the game strong, scored 30 points in the first quarter and 52 before the half. But North Macedonia put a lid on their rim in the second half, allowing only 26 points, forcing Italy into 3-of-11 shooting from deep in the second half.

Game hero: Nenad Dimitrijevikj had 22 points and 7 assists, but Andrej Magdevski's contribution from the bench proved to be crucial. Magdevski had 20 points on 7-of-10 shooting, including 4-of-6 from three-point range, and North Macedonia were a +20 team with him on the floor.

Stats don't lie: Italy turned the ball over 16 times, which is not that bad compared to North Macedonia's 14. But North Macedonia had 23 points from turnovers, compared to 13 of Italy, a +10 advantage which proved to be enough for a famous first win. 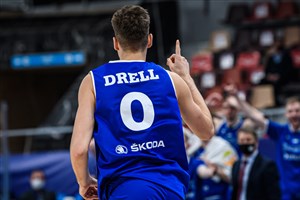 Who can claim the final two tickets to FIBA EuroBasket 2022? 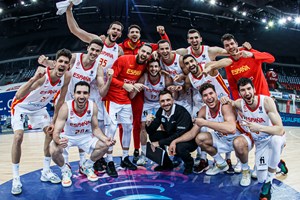