MUNICH (Germany) - A number of talented youngsters shaped the story of the February window of the FIBA EuroBasket 2022 Qualifiers. Some made their first impression on an international audience, while others already dominated the veteran-filled competition.

FIBA contributor Marius Flachenecker has taken a look at 10 standouts born in 2000 or later who made an impact during the third and last qualifying window for next year's flagship event.

Since joining Mega Bemax in the summer of 2020, Filip Petrusev has been one of the more dominant offensive players in European basketball. With averages of 23.5 points, 7.7 rebounds and tremendous efficiency numbers (58.4% FG, 44.9% 3FG, 66.6% TS) in the ABA League and the Serbian Cup, the 20-year old big earned his first call-up to the Serbian senior national team, after he had already represented them 33 times at various FIBA youth tournaments.

In Tbilisi, he was able to transfer his domestic dominance onto the international hardwood, delivering two excellent performances in Serbia's wins over Georgia and Switzerland. Petrusev proved unstoppable offensively. He converted several hook shots from the post, took defenders off the dribble out of face-up situations and even from the perimeter and finished multiple alley-oop dimes from his teammates. Additionally, he hit two shots from downtown, continuing a hot streak, which started in December. After a slow start from the three-point line (2-14 in his first six games for the club), he caught fire, hitting 22 of his last 39 attempts throughout all competitions.

With these performances and his overall productivity this season, Petrusev has shown that he's here to stay, which gives Serbia another potent option at the center spot.

Alperen Sengun is the rising star of the 2020-21 European basketball season. The 18-year old big has been remarkably productive, to the point where he's risen to the first round of mainstream draft boards for the 2021 NBA Draft. He's averaging 19.5 points, 9.4 rebounds, 2.3 assists, 1.8 blocks per game with incredible efficiency (64.1% FG, 69.9% TS) for Besiktas in the Turkish BSL and the FIBA Europe Cup, dominating around the rim with fantastic touch and footwork, grabbing a ton of rebounds due to his strength and smarts and contributing in several other areas of the game as well.

In Istanbul, the big man put on a show in Turkey's crucial win against Sweden, even though it was only his third game for the senior national team. Sengun tormented Sweden's interior defenders all game, scoring in the post, as the roll-man and even converting a stepback three-pointer to beat the shot clock in the middle of the second quarter. He wasn't as dominant in Turkey's second win of the week against Croatia, but still played a vital role in their fourth-quarter-run, to which he contributed multiple defensive stops against smaller players and one chasedown block, preventing an easy layup.

It's been a special time in the #EuroBasket Qualifiers for the @TBF 🇹🇷 sensation @alperennsengun!

With these two wins, Turkey qualified for their 14th EuroBasket in a row. By the time the tournament happens in the summer of 2022, Sengun will likely have completed his first season of NBA basketball.

Bosnia and Herzegovina played a tremendous qualifying phase. With five wins out of six games, they easily secured a spot in the EuroBasket, and Kenan Kamenjas played a big part in that success story. Despite his youth, the big man has been very productive in the Bosnian League (16.4 PTS, 8.6 REB, 68.3% TS) and delivered impressive performances on the international stage as well.

Kamenjas was an integral part of both of Bosnia and Herzegovina's wins during this qualifying window. He efficiently converted the feeds of his teammates around the basket and occasionally created shots for himself from the post as well, mostly with smooth drop steps. Furthermore, he grabbed seven offensive rebounds in their game against Bulgaria, which catapulted him up to 3.3 offensive rebounds per contest, enough for a tied second place in the whole competition behind Slovenia's Jordan Morgan.

Mihai Maciuca had multiple high-scoring FIBA tournaments at the youth level, and during this qualifying window, he caught fire at the senior level as well. The 20-year old impressed especially as a shooter, confidently taking and making difficult three-pointers and even punishing the defense for going under ball-screens with pull-up threes. Maciuca had proven his shooting ability in the Romanian league, where he's currently hitting 40.7 percent of his threes and 85.2 percent of his free throws, and now he's also shown his talents to an international audience. He wasn't limited to shooting either. Time and time again, he attacked the basket and produced multiple nice finishes through contact, rounding out an impressive few days of basketball for the Romanian.

In the last game of the qualifying phase, Poland coach Mike Taylor inserted 17-year old Jeremy Sochan into the starting lineup. The transition to the senior game couldn't have gone any smoother for the swingman, even though it was only 18 months ago that Sochan led Poland in the FIBA U16 European Championship, Division B and won MVP in the process. Against Romania, the Baylor-commit introduced himself to the audience with a thunderous two-handed jam and never looked back after.

Offensively, he exhibited no signs of nervousness, converting 4-of-5 jump shots, 5-of-5 free throws and even completing a four-point play. Defensively, he showed his usual prowess, affecting shots with his long arms, collecting two blocks and disrupting smaller players on switches. This was only Sochan's first game at this level, but with his talent, it's easy to see him become a regular contributor for Poland's national team in the near future.

Henri Drell has improved tremendously in his second season in Italy's Lega Basket Serie A. After struggling last year, he's now averaging 6.8 PTS (62.1% TS) while shooting 45.7 percent  from three for a much improved Pesaro team. In Perm, Drell was able to show the same offensive abilities and helped propel Estonia to their third EuroBasket qualification of the century. He confidently let it fly from downtown whenever open, effectively attacked closeouts and hit the dagger in Estonia's upset win over Italy. The forward also had his moments defensively, moving his feet on the perimeter and forcing smaller players into tough looks from time to time. Drell's talent has been known for a long time, and with the progress he's made this year, he's poised to become a mainstay for the Estonian national team for a long time.

We selected Keye van der Vuurst de Vries as one of the standouts of the qualifying window in February 2020, and with his performances against Croatia and Sweden, he earned himself another selection. The 19-year old initiated a fair share of the Netherland's offense and frequently created easy opportunities for his teammates with his excellent court vision and passing skill. Moreover, van der Vuurst de Vries had his moments as a scorer, attacking the basket out of pick-and-roll and hitting a couple of crucial three-pointers. With these showings, the point guard confirmed his tremendous season for Oostende, where he's currently putting up 8.1 points and 4.5 assists per game while shooting 52.4 percent from the field, and 42.9 percent from three in the Belgium EuroMillions Basketball League and the FIBA Basketball Champions League combined.

Aleksander Balcerowski was a valuable contributor for Poland during their two games in Gliwice. The big man finished efficiently around the rim and had various notable dunks, including one against Spain where he tricked his defender into thinking he was going to hand the ball off to a guard, only to pivot and drive to the basket for a crashing slam through contact. Additionally, Balcerowski showed decent court vision for his size, dishing out multiple nice assists from the perimeter and on the short roll. With these performances, he built on the best year of his career so far, which has seen him break through into the rotation of Herbalife Gran Canaria and earn regular minutes in the Spanish ACB as well as the EuroCup.

Matteo Spagnolo was one of the rising stars of this qualifying window, excelling at the senior level only 18 months after he made the All-Tournament Team at the FIBA U16 European Championship. In his two standout performances against Estonia and North Macedonia, the scoring guard controlled the game with impressive poise and never looked out of place, even though he doesn't have much experience at the pro level yet. The 18-year old was especially effective against switches, where he successfully used his body and his footwork to carve out space against bigger defenders, and finished the possessions by doing what he does best: hitting tough shots. Despite his youth, Spagnolo has developed a tremendous knack for converting off-balance jump shots, a quality which will surely help him prosper at the senior level.

Despite the unsatisfactory results in this qualifying window, the future of Italian basketball is looking bright. Spagnolo, Giordano Bortolani and Gabriele Procida showed flashes of their talent during these three games, and countless other prospects like Nico Mannion (Golden State Warriors), Abramo Canka (Nevezis), Sasha Grant (Bayern Munich) and US high school phenomenon and Duke-commit Paolo Banchero have shown promise as well and could be important contributors in the future.

With qualification secured, Bulgaria gave 17-year old Konstantin Kostadinov his first taste of senior national team basketball. The versatile forward had excelled for Bulgaria in three FIBA U16 European Championship, Division B campaigns and didn't take long to make an impact at this level either. In the second quarter, he confidently sank three three-pointers, showing no hesitation even with defenders quickly closing out to him. He showed further glimpses of his potential with a few accurate kickout passes and one excellent defensive play, which resulted in a block. Kostadinov's talent has been known for years, and it was obvious in this game as well. If he develops properly, he could be an essential part of Bulgaria's future. Who knows, maybe he'll ready for a roster spot at the EuroBasket as early as next year. 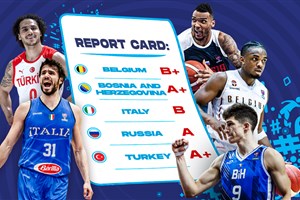