Draw reactions: Extra motivation against the defending champs; another rendezvous for Germany

MUNICH (Germany) - We still have a long way to go until FIBA EuroBasket 2022 starts, but the draw on Thursday drew out initial reactions to all the groups. A loaded, start-studded Group B takes the focus.

It is because the defending champions, FIBA EuroBasket 2017 winners Slovenia are over there, and they've got games against Germany, Lithuania, France, Hungary and Bosnia and Herzegovina. A group with former winners from 1993, 2003, 2013 and 2017.

"We are in an interesting, but highly demanding group. I am certain all the other teams will have a bit extra motivation because they will be playing against us, the reigning European champions. My biggest wish is that we pick our best possible squad at that moment. We already know the winning formula," Klemen Prepelic, the hero from the FIBA EuroBasket 2017 Final, said.

A lot of these teams have played each other over the past decade, whether in major events, or in the FIBA EuroBasket Qualifiers. But nobody knows each other better than Germany and France.

"Somehow, we always end up with France," Dirk Nowitzki said, enjoying his role as the Ambassador of the FIBA EuroBasket 2022. "It's tough that we also have Slovenia and Lithuania after that, but I hope the guys will do a better job with the home crowd than we did in 2015. One can only hope the home crowd will push them all the way to Berlin."

In Group A, the FIBA Basketball World Cup 2019 winners Spain are set for another duel with Russia. Turkey, Belgium and Bulgaria are also in the group hosted by Georgia. Not the easiest of draws for Belgium, who made it to the Final Round after playing in the FIBA EuroBasket 2022 Pre-Qualifiers, way back in September 2018.

"It's a tough group for sure, but there are no easy groups at the FIBA EuroBasket. Spain will be the favorites, Turkey and Russia are excellent teams, especially with their NBA players. Georgia will be the host country and could come as a surprise, while Bulgaria will be the underdog," Belgium's playcaller Dario Gjergja explained.

Gjergja's home country Croatia will be in Group C in Italy, along with the hosts, Great Britain, Ukraine, Estonia and Greece.

"It is very difficult to assess the quality of the national teams a year or so before the event, even if some of them have familiar coat of arms on their jerseys. What is certain is that our movement deserves to have a great basketball show, especially in a complicated period like the one we are experiencing now. I really hope that in September 2022 we can play in the Forum with all the spectators in their places," Italian technical commissioner Meo Sacchetti said.

Finally, Group D. Serbia look like the hot favorites next to the Netherlands, Finland, Poland, Israel and their group hosts Czech Republic. However, the coach who won it all in 2017 is now at the helm of the Serbian national team and he knows this one is as tricky as the others.

"It won't be easy. Maybe they aren't the biggest of names on paper, but Czech Republic, Poland and Israel will especially be tough for us. We do believe in ourselves. We are sure that a lot will depend on our own game," Igor Kokoskov offered.

FIBA EuroBasket 2022 will be played in Czech Republic, Georgia, Germany and Italy in September 2022, with the knockout phase taking place in Berlin. 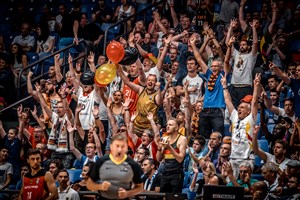 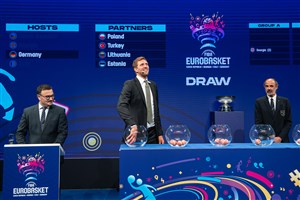 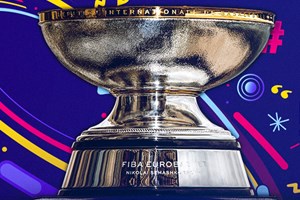