Sabonis eager to suit up for Lithuania at FIBA EuroBasket 2017

OKLAHOMA CITY (FIBA EuroBasket 2017) - Domantas Sabonis has been enjoying a solid NBA rookie campaign with the Oklahoma City Thunder following an unforgettable Olympic debut with the Lithuanian national team at the Rio 2016 Games.

When his name was called by NBA Commissioner Adam Silver at last June's NBA Draft, few expected the son of Lithuanian basketball icon and NBA and FIBA Hall of Famer Arvydas Sabonis to make an immediate impact on the league.

However, the 20-year-old forward known as Domas didn't need much time to get used to the NBA game and was fast-tracked to a starting job with the Thunder by coach Billy Donovan.

FIBA.com spoke with Sabonis about his eagerness to represent Lithuania at FIBA EuroBasket 2017, following in his father's footsteps and the NBA learning curve.

How important is it for you to play with Lithuania's national team?
It is very important. I like to represent my country at the highest level in every competition, whether it is EuroBasket, the FIBA World Cup or the Olympics. I am very proud to be from Lithuania and I want to do my best for my country.

Lithuania will play in the Tel Aviv-based Group B after being chosen as a partner federation by FIBA EuroBasket 2017 co-hosts Israel.  You will play against the national teams of Israel, Ukraine, Georgia, Italy and Germany. What do you think about the Draw?
It's a difficult group, a very competitive one. The level in Europe is getting better each year and we have to play at our best level in every game. All of the teams have a lot of good players.

After back-to-back silver-medal finishes at FIBA EuroBasket 2013 and 2015, what are your expectations this year?
We always play to win. We are always trying to do our best. We are going to play hard and try to win this tournament. We need to win every single game and try to get the continental crown.

Is playing at FIBA EuroBasket 2017 a goal for you next summer?
Yes, it is. We still have to figure it out with the Thunder organisation but as for me, I would like to play.

Your father, Arvydas, is a Lithuanian basketball legend. What is his influence on your life and career?
He is always on my side. He has always supported me and he is always giving me advice on how to improve my game. He watches almost every game I play and he calls me often to tell me how to do things better.

What is the best advice he has ever given to you?
To be patient and work hard until my opportunity comes. As things have been going very fast for me this year, he always tells me to stay focused and keep working hard. He wants me to do my best and I want to learn as much as I can from him.

Have you watched any of his games?
Yes, I have. Mostly on YouTube and in some videos he has at home. Sometimes, it happens that we watch some of the games he played in videos that he recorded.

Your rookie season has been going very well so far. What are your thoughts about your first year in the NBA?
A lot of things have happened since the beginning of my NBA career. I was traded on Draft Night for example, so I started the season not knowing what to expect. But I got some playing time right away and I'm enjoying it so far. I am happy with my current situation. I am learning a lot and feeling good about it.

📹COAST TO COAST BY SABONIS!pic.twitter.com/WnsqxAcu7n

You are on a team that plays fast-paced basketball and you have moved to the power forward position after being mostly the five-man at Gonzaga in the NCAA. How is that going?
Since moving to the Thunder, I have had to start learning about playing at power forward as they want me to play at this position. [Coming into the NBA]I was not used to it, but I have been learning about playing at the four and I am enjoying it. In Oklahoma, they like that I can shoot from the three-point line, drive to the basket and move the ball.

This year, you are taking a lot more shots from behind the three-point line than ever before.
I wasn't shooting that many threes in the past, but right now that's what the coach asks me to do. So that's what I do (laughs). I spend a lot of time at the gym working on it and I am trying to make some shots from the three-point line during the games, when I have an open spot behind the line.

You played in Malaga before coming to the NCAA. What made you take that path instead of staying in Europe before coming to the NBA?
Going to Gonzaga was my decision. I wanted to cross the Atlantic to play [in the States]. It was my first time being alone, without any family around me. When I visited the campus, I knew that it would be the best place for me to develop my game, so I decided to join Gonzaga. I had a great time there and learned a lot. It was very useful for my progression.

Jonas Valanciunas and Mindaugas Kuzminskas have been having solid seasons so far as well. Do you talk to each other often during the season?
Yes, we do. I talk a bit more with Mindaugas, as we played together at Unicaja Malaga and we are good friends. But, whenever we play against each other, we go and have dinner with Jonas or Mindaugas.

Your national team roommate Kuzminskas is also a rookie. Are you surprised by his performances in his first season?
Not really. He is a very good player and he played very well in Rio 2016 against the best players in the world. He seems to be very happy with his season so far and I am sure he is going to keep playing at a very good level. 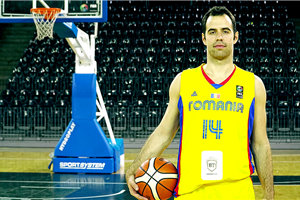 Romania's Nicoara ecstatic about opportunity to play in FIBA EuroBasket 2017

Israel to face Turkey, Slovenia and Russia in build-up to FIBA EuroBasket 2017 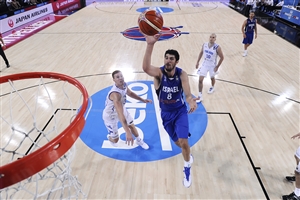