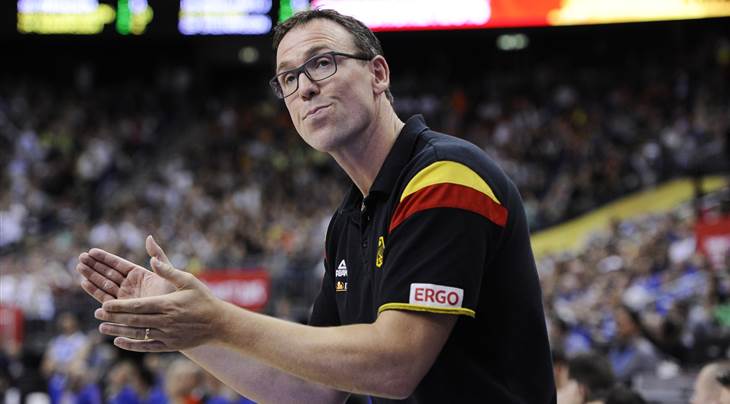 Germany coach Fleming: 'This tournament can be the best EuroBasket ever'

NEW YORK (FIBA EuroBasket 2017) - Chris Fleming will coach Germany at his second FIBA EuroBasket this summer. An assistant coach in the NBA with the Brooklyn Nets, Fleming has spoken to FIBA.com.

Chris, tell us about your long history with German basketball.
I was very lucky as I got to see German basketball at a lot of different levels as a player and then as coach. I first came to Germany and played in the fourth division, then came up to the second division, then coached in the second and first divisions. I was able to coach the U20 national team and now the senior one. I owe a lot to Germany for allowing me to develop as a coach and my ties to the country are obviously very strong. I love that aspect of my work, being with the national team, and I am really happy with the generation of guys that I have worked with and the ones coming up.

There have been some hugely important issues that German basketball has had to deal in the past decade.
I think that the biggest thing was that, when I first started coaching in the first division, they opened up the foreigner rules and there was no protection for German players. That kind of wiped out a whole generation of German players that had potential but had nowhere to play. Everybody kind of realized that in German basketball. They changed the rules to put the 'six to six rule', which has allowed local guys to grow. Now you have a lot of German players having successful careers, which was not really happening at the time when I first started coaching. Now we have guys playing successfully in Spain. We have three German players in the NBA and some very good prospects in the youth national teams. Those aspects represent a lot of growth. I think we have some boundaries that we need to jump over, like figuring out how to develop our perimeter players a little bit better, especially at the guard position, but I think everybody is working on that. I feel great about the positive development of German basketball and that we are going to keep improving a lot moving forward.

What about the current crop of German youngsters like Kostja Mushidi and Isaiah Hartenstein? They're on the radar of a lot of NBA teams. Are we at the start of some exciting years for German basketball? Mushidi shone at the 2016 U18 European Championship in December

Oh yes, I think so. First of all, the current generation of the senior national team has a lot of good things to bring to German basketball and being able to infuse those kids of the future into the senior group of players is a great thing for us. There are some kids who have very high potential to be really good players. That would be the challenge; a positive challenge for the coming years as those kids are going to want to play for the national team at every level and Germany has the potential to make great things in competitions at every level. We're all looking forward to the future.

Dirk Nowitzki retired from the national team in 2015. How does Germany move forward without him?
We can be very thankful that he decided to come back and play with us in 2015. Dirk gave to the new generation a great example of how much you have to work to succeed, because he set the bar high every day in terms of work ethic and showed the young guys what to do to improve. He didn't want to leave the team without helping his teammates, such as Dennis Schroder for example, and every player now has to be an example of work and be a great flag bearer of German basketball. Having Dirk play with us at EuroBasket 2015 was great as he helped the youngsters a lot and showed how he wanted to help the national team improve.

Nowitzki was a great example for Germany's younger players

Have you gotten over the disappointment of the narrow defeats, including against Spain, and not advancing from the Group Phase of FIBA EuroBasket 2015?
That campaign left a hole in our stomachs. We just talked about Dirk, and nobody wanted to see him finish his international career that way. We all wanted to give him something great for his last games with the national team. But we also have to understand that at that time, Dennis Schroder (Atlanta Hawks) was only 21, Paul Zipser (Chicago Bulls) was only 21 and now both of those guys have two more years of very high-level basketball experience. Johannes Voigtmann (Baskonia) was a back-up on that team and now he is one of the best big men in the Liga ACB. All the young guys in the team have gathered international experience and people forget that Schroder hadn't played that many games at international level ahead of 2015. Long term, it will be a good learning experience even it it did hurt at that time.

Schroder is a real talent.
He is mentally very strong. He wouldn't be where he is now if he weren't mentally tough and strong. He has a different kind of personality than a lot of German international players, including Dirk, and he is very competitive. It's a good thing for German basketball as we, the staff and the federation, but also the media and the fans, let him be himself and develop his own personality. Dennis is a great competitor and he likes to learn and improve. He is always going to get it done, he wants to grow as a player and is not scared of responsibility. Those reasons are what make him special.

Germany has been included in Group B with Israel, Lithuania, Italy, Georgia and Ukraine.
It's a very good group. I always find it very difficult to talk about my thoughts about the group, as we don't know who is going to come play for the national team and I have a lot for respect for every team. Basically, since we left the competition in 2015, we've been talking about (EuroBasket 2017). This tournament can be the best EuroBasket ever. A lot of teams can fight for a medal and every national team has been improving a lot. It's going to be an amazing tournament. I don't think that I've ever been more excited for anything in my career as I am for this coming summer at the EuroBasket.

The biggest challenge for Germany's national team?
For us to keep building on the continuity. Germany had five different coaches in five years, some guys in and some guys out, and the challenge is really to keep the core of this group together and keep growing. We have to come healthy and compete at our best level. We have a very compacted time to get ready for this kind of tournament and you have to figure out how to keep improving and be competitive. Lecomte hopes to play for Belgium at FIBA EuroBasket 2017