SHANGHAI (China) - Defending champions USA survived a major scare against Turkey and won 93-92 in an overtime thriller to advance to the Second Round of the FIBA Basketball World Cup.

Turkey led 92-91 with 9.0 seconds left but then missed four three throws to let USA back in the contest. Jayson Tatum grabbed the rebound off a free throw miss from Cedi Osman and streaked down the court before dropping it off to Khris Middleton who drew a foul. The 6ft 6in (2.05 M) forward calmly drilled two free throws to give USA the lead with 2.1 ticks left.

Ersan Ilyasova missed a three at the buzzer and the USA won their 21st consecutive game at the World Cup by the narrowest of margins. Middleton top-scored for USA with 15 points and Kemba Walker hit some big shots in overtime to finish with 14.

Trailing by 15 points in the second quarter, Turkey were in a major hole but fought back through inspired play from Ilyasova (23 points and 14 rebounds).  A tip-in from Ilyasova with 12 seconds left in regulation gave Turkey a two-point lead but Tatum was fouled from behind the arc with 0.1 second on the clock left.

The Boston Celtics forward made two of the three shots to force overtime and USA hung on from there.

Turning Point: Turkey will lament missing free throws down the stretch. Dogus Balbay and Osman lost their nerve at the stripe.

TCL Player of the Game: Unlike others in the game, Khris Middleton stepped up to the line and sank the two free throws to give USA the lead and ultimately the win. The Milwaukee Bucks small forward also made some big-time shots and finished with a team-high 15 points.

Stats Don't Lie: The USA survived a horrendous 35% from the field but did make 14 threes compared to Turkey's 10, which made a difference in the end.

Bottom Line: USA will play winless Japan in their final Group E game, while the winner of Turkey and the Czech Republic will advance.

They Said: "I have to give a shoutout to everybody on the team. We stuck together and grinded this thing out. We know we are going to get every team's best shot. We are Team USA. Teams are gunning for us and want to beat us. They gave us a run for our money. Hats off to them for a great game.The chemistry is unbelievable right now and it can only go up from here. This was a great game, a battle." - USA center Myles Turner

"It was a heck of a game as we all know. It was anybody's game. We will accept the win but it was anybody's to win. The team that we played tonight showed its experience and the improvement that we have to make execution-wise. We are not there yet. We are still trying to get better at that." - USA coach Gregg Popovich

"We just wanted to go out there and step up, everybody step up today. The game was in our hands; we gave them the game. It's not easy to play against them but we did everything. We just want to play for our national jersey. That's the most important thing for us. We want to compete against everybody. It doesn't matter who." - Turkey small forward Furkan Korkmaz

"I am very sad. I think USA are the favorites in this tournament. We played really great today. We did our best. We got control of the game but we made easy turnovers. We gave them easy fast break points. We are going to play one more very important game against the Czech Republic. Now we have to focus on this game." - Turkey coach Ufuk Sarica 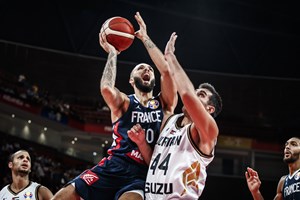 France advance to the Second Round with masterful win over Jordan

Six more teams book their Second Round tickets on Tuesday 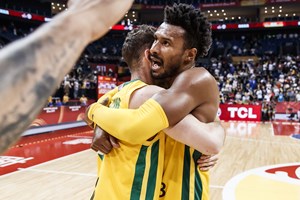