Even though they were sluggish at times, the world No.1 team had too much firepower and eventually overwhelmed the Europeans after a tight start. It was a balanced effort with Donovan Mitchell leading the way with 16 points, while Harrison Barnes (14) and Kemba Walker (13) were also solid contributors.

Turning Point: USA struggled to score after the long break and their margin was reduced to 11 points. But they shut the door on any hopes of a Czech upset with a 16-7 run fueled by a couple of sweet buckets from Marcus Smart, who is better known as a defensive specialist.

TCL Player of the Game: Kemba Walker got the USA rolling early and made important buckets throughout. The diminutive guard showcased some trademark tricks around the basket and didn't miss from two-point land, finishing with 13 points, 4 assists and a steal.

Stats Don't Lie: Gregg Popovich, a famed disciplinarian, should be satisfied with his team's ability to protect the ball. They only made seven turnovers compared to the Czech Republic's 15.

Bottom Line: It was an expected comfortable victory for USA but they should face a tougher challenge against in-form Turkey on Tuesday. For the Czech Republic, it's must win against Japan.

They Said: "I think the story was that we were not intimidated by them. Obviously, their physicality, athleticism, and individual skill was too much for us at the end. We weren't scared and played good defense, especially in the first quarter. I think it was a good game for us." - Czech Republic small forward Tomas Satoransky

"It's always disappointing when you lose a game but I think this was against the best team in the world. Our game plan went well. Overall though, I am very satisfied with our game defensively and offensively. I hope it will give us confidence as we continue." - Czech Republic coach Ronen Ginzburg

"It was a very competitive game, physical, and the opportunity to learn a lot. The international (game) is a little different, obviously, from the NBA. A lot of great teams and it's an opportunity to get better. That's how we look at each of these games, to try and be the best team that we can be, and we've got a ways to go but we're willing." - USA coach Gregg Popovich

"We've got to give credit to (the Czech Republic) for starters. They are very competitive and they executed really well. That's what we expected coming into this tournament, teams to be really connected and their chemistry to be at a really high level. We did a lot of good things. We guarded well but we have a lot of things to work on." - USA shooting guard Donovan Mitchell 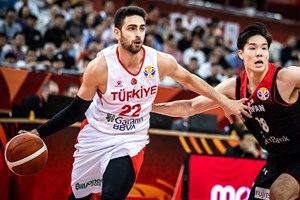