Spain had the better start in this encounter, scoring 14 of the game's first 16 points, and though Argentina mounted repeated runs to trim Spain's lead, coach Sergio Scariolo's side withstood every Argentine charge.

Spain also unleashed extremely tight defense on Argentina, who had to bleed for their points. For the first time in the World Cup, veteran big man Luis Scola was held scoreless for an entire half, and that undoubtedly had a negative impact on Argentina's quest for their second World Cup trophy.

Coach Scariolo's side never let up the pressure, intensifying their aggressiveness on both ends of the floor as the game progressed, disabling Argentina from turning the tide and ensuring an eight-game sweep of the World Cup.

Ricky Rubio had 20 points to lead Spain, which also got double-figure scoring Rudy Fernandez, Marc Gasol, Sergio Llull and the Hernangomez brothers. Argentina were led by Nicolas Laprovittola and Gabriel Deck, who tallied 17 and 24 points, respectively.

Turning Point: Argentina's 12-point half-time deficit still seemed manageable given their explosiveness, but it was the Spaniards who blew it open in the third quarter. After the Argentines opened the second half scoring with Luca Vildoza free throws, Spain went on a 14-0 tear that expanded their advantage, 55-33. That 22-point cushion proved more than enough to keep Argentina at bay the rest of the way.

TCL Player of the Game: Ricky Rubio has been terrific all tournament long, and once again he didn't disappoint under the brightest lights of the World Cup, putting up 20 points on top of 7 rebounds and 3 assists. Perhaps more importantly, he held Argentina's star playmaker Facundo Campazzo to just 11 points on 2-of-10 field goal shooting. This is the crowning jewel on Rubio's amazing run here in China, where he also surpassed Argentina's Pablo Prigioni as the World Cup assists leader since FIBA started recording all game statistics in 1994.

Stats Don't Lie: Spain asserted their might in the paint and showed Argentina that they too could have fluid offensive execution. The Spaniards outrebounded the Argentines, 47-27, and outscored them in the painted area, 44-30. Coach Scariolo's squad also shot much better from the floor, making 48 percent of their field goals compared to just 36 percent for Argentina.

Bottom Line: Spain capped a dominant World Cup campaign with a dominant performance in the Final. Their championship poise enabled them to perform at peak level on the World Cup's biggest stage, and this victory exorcises the demons of getting eliminated in the Quarter-Finals five years ago in their own backyard.

Argentina, for their part, should not hang their heads. They were one of the most fun teams to watch in the entire World Cup, and showcased amazing play on both ends. Scola's age-defying production was one of the top stories of the competition, and coach Sergio Hernandez displayed some fine up-and-coming talents from his country.

They Said: "I think we did an amazing job during the last two weeks. During the tournament, we played amazing games. We showed our potential, our best basketball. You have to keep going. You have to learn from this last game. We have to improve to the next level." - Argentina guard Nicolas Laprovittola

"About the game, Spain played greater than us. Their plan and execution were perfect. They have great players with more experience. They were really better than us tonight. We were not tired, we wanted to win, we really felt great before the game, but this is basketball. If you play better than the other team, you'll win, and Spain was the better team today. Of course, we played a great tournament. We beat Serbia, France, Russia... a lot of top teams, and we played very very well. I would quickly forget the final game, say congratulaitons to Spain, but I don't think we lost the gold medal. I think we won the silver medal. I'm so proud of my players, the best players in the world." - Argentina head coach Sergio Hernandez

"Right now we made history, and we were ready for that. We had a great tournament. We had to fight for this one. It's just amazing how the whole tournament has been for us as a team. We weren't the biggest or most talented team, but we were the team with the biggest heart. We showed it tonight and in the whole tournament. Couldn't be more proud of my teammates and our coaches. This will go down as a memory for us as a family." - Spain guard Ricky Rubio

"Thanks to my players. They've been awesome. They've been great since day one until tonight. I had a good feeling before this game, but I saw my players concerned and really worried about the opponent. Argentina deserved all our respect. They are fierce competitors. My thanksgiving should go to all the staff, to my team the Raptors, to our federation, to my family, and the players' families, too. It's a joy, and I can only be proud of what these guys did. We were not the tallest or most talented or in the odds when the tournament started, but we worked hard. They didn't lose faith in themselves, and basketball rewarded them." - Spain head coach Sergio Scariolo 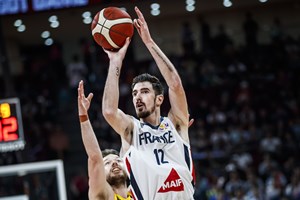 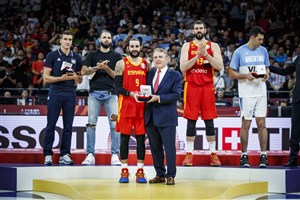