Scola propels Argentina past France and into World Cup Final

BEIJING (China) - The seemingly ageless Luis Scola starred once again for Argentina in their masterful 80-66 Semi-Finals win over France at the FIBA Basketball World Cup in Beijing.

As he has done so many times in the past, the 39-year-old Scola deftly maneuvered his way in and around opposing defenders as he totalled 28 points and 13 rebounds to lead Argentina in their first World Cup Semi-Final win since 2002.

France kept it close for an entire half, but Argentina's persistently fluid play took the wind out of coach Vincent Collet's sails in the latter two quarters. Try as Les Bleus might, they just couldn't find their offensive rhythm, and for every run they mounted, the Argentines had an answer.

Scola's efforts were backstopped by Facundo Campazzo and Gabriel Deck, who scored 12 and 13 points respectively. France were led by Frank Ntilikina and Evan Fournier, who combined for 31 points.

Turning Point: France trailed by just four points in the waning moments of the first half before Argentine point guard Facundo Campazzo drained a buzzer-beating three-pointer to give his side a 39-32 lead at the half-time break. The body language of the French instantly changed after that shot, and it was the spark that started to swing the momentum into Argentina's favor for the rest of the game.

TCL Player of the Game: Seeing Scola do well at this level never gets old. He already had a double-double at half-time, and just continued to make an impact on the game the way only he can. He certainly isn't one of the fastest or most athletic guys on the floor, but his savvy and basketball IQ were unparalleled in this encounter.

Stats Don't Lie: France shot an ultra-efficient 52.4 percent from the field in their first six games of the World Cup, but in the Semi-Finals, they strangely threw up brick after brick. By game's end, France's field goal success rate was an just 38 percent. Their free-throw shooting was also something to forget, at just 55 percent.

Bottom Line: Argentina have a chance to win their first World Cup since they hosted and won the inaugural edition in 1950. They fell short of that feat in the World Cup 2002 Final, but they'll have another shot here in Beijing when they tackle the only other unbeaten team in the field, Spain.

After beating USA, Rudy Gobert mentioned that even a win of that magnitude wouldn't mean a thing if they don't win it all. Now he and his teammates will have to do some soul-searching before they face Australia for third place on Sunday.

They Said: "They were just the better team tonight. From the first to the last minute, they were more aggressive and played more as a team. They jumped the passing lanes and pushed us out of our spots. It was complete domination." - France center Rudy Gobert

"They [Argentina] deserve it. We used to say that aggressiveness is a main key, and tonight there was no aggressiveness from us. We couldn't execute our plays. They put so much pressure on our guards, even bringing the ball up was difficult. We also missed free throws and gave them more offensive rebounds that allowed them to score." - France head coach Vincent Collet

"It was a great game for us. The coaches planned it perfectly, and we understood it to a T. To beat a team like France, we knew we had to play great defense, play to our identity and we did it. We knew they had a great offensive team, but we knew we could stop them. That put some trust in us to execute offensively, and our shots fell" - Argentina point guard Facundo Campazzo

"We knew that whoever wins the tempo wins the game. France is a great team, but they play differently than us. They don't run as much as we do. We knew that against us they will play the same way. I think we won the tempo battle today. We made them play our game, and we played the best defense I've never seen from any team." - Argentina head coach Sergio Hernandez 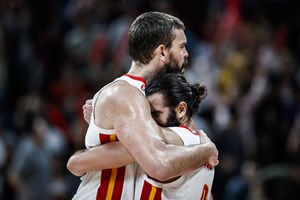 Spain comes first for Gasol: ''These are the values and legacy we've been taught''