ATHENS (Greece) - It's not every day an NBA player would be heard wishing to trade his NBA Most Valuable Player award for a FIBA Basketball World Cup title, but that's exactly what Giannis Antetokounmpo is thinking.

Giannis is set to become the first player to see action at the World Cup right after capturing the prestigious MVP award, and to do so for a Greek program that has seen a lot of success at this level is nothing short of significant.

The 24-year-old didn't mince his words as he expressed his desire to shock the world this year.

"I would exchange the MVP title for the gold medal in China," he declared.

A post shared by Hellenic Basketball Federation (@hellenicbf) on Aug 4, 2019 at 4:52am PDT

Dubbed the "Greek Freak," Giannis has had a profound impact on the game these past few years, rising from a big question mark in the NBA Draft 2013 to become arguably the best player on the planet right now.

In just six NBA seasons and at just 24 years of age, Giannis has blossomed into an unstoppable force, leading the Milwaukee Bucks to their best record since the 1980-1981 season and clinching their first number one seed in 45 years.

Still, despite all that he has achieved, Giannis knows that the ripples of his growth and stardom go way beyond the confines of the NBA. Back in Greece, the 6ft 11in (2.11m) wingman has become an icon for anyone hoping to emerge from obscurity and reach the pinnacle of excellence.

That's why for Giannis, putting the Hellas kit on is an unparalleled experience, and that's why winning the World Cup would be his brightest crowning glory yet.

"I always feel something special when playing for the national team," he explained. "When you are starting the tournament and listening to the national anthem, the emotions can’t be described. After the first basket, the first plays, it is an amazing experience and every time I feel as proud as the first time. The feeling of winning with the national team is incredible, and I have said before that I will always be part of the team, as long as I am healthy like this summer."

Another element that adds meaning to this year's World Cup campaign is the fact that Giannis will be with two of his siblings in the national pool: older brother Thanasis and younger brother Kostas. The former has been on an NBA and EuroLeague journeyman and will be Giannis's teammate in Milwaukee for the 2019-20 NBA season, while the latter is expected to see action for the Los Angeles Lakers.

This is how we roll babe! #NikosGikasVoice

Before all that, though, the three Antetokounmpo brothers will be focused on one thing - leading Greece as far as they can in the FIBA Basketball World Cup 2019, where the table has been set for what seems like one of the most wide open races for the title of world's best.

"We're just trying to encourage each other and get better," Giannis shared. "It is an incredible feeling that all three of us are together. We have worked very hard to get here and to achieve this. That's why I know that our mother is proud, as is our father, who I'm sure is watching us from the heavens."

Greece, of course, made headlines the last time the World Cup was held in Asia after they beat Team USA in the Semi-Finals of the World Cup 2006 in Saitama, Japan. Back then, Giannis was not even 12 years old, but now he's all grown up and ready to be the face of Hellas as they aim to stun the global basketball community on an even bigger scale.

The Greeks have been drawn into Group F at the World Cup, where they will face Montenegro, Brazil and New Zealand in succession. All Group F fixtures will be played at the Nanjing Youth Olympic Sports Park. 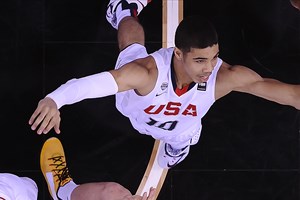 Can experience and success on the junior level help the USA in the World Cup? 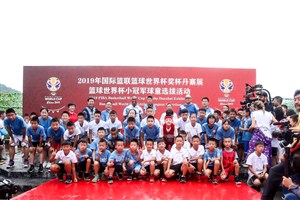