DONGGUAN (China) - USA will not become the first team to win the Naismith Trophy in three successive events after they suffered their first FIBA Basketball World Cup defeat in 13 years. France defeated the defending back-to-back champions 89-79 to set up a Semi-Finals date with Argentina.

It was a genuine game of runs, as France opened up a 10-point deficit in the third quarter, only to find themselves down by seven early in the fourth after a 17-point swing by Gregg Popovich's small ball lineup. However, that was not the end of France: Frank Ntilikina hit a number of tough shots, Rudy Gobert played his part inside, while Nicolas Batum and Evan Fournier also contributed with field goals.

When it was time to ice the game from the line, coach Vincent Collet knew who to give the ball to. Nando De Colo went 9-of-10 to put the game out of the reach of USA, who got 29 points from Donovan Mitchell, the most for any US player in this tournament.

Fournier was unstoppable early on, scoring 20 of his 22 over the first three quarters, Gobert had a 21-point, 16-rebound double-double, De Colo scored 18 points, and Ntilikina finished with 11 for France.

Turning Point: France owned an 82-78 lead with just under a minute to play. USA had their chance, giving the ball to Donovan Mitchell who decided to take on Rudy Gobert - his Utah Jazz teammate - one on one. It looked like Mitchell managed to escape the tall French center, but out of nowhere, Gobert extended his arm to get a block and protect the lead for his team, showing why he was the NBA Defensive Player of the Year in 2018 and 2019.

TCL Player of the Game: Gobert. His 21-point performance showed he can be an offensive weapon, too, and his 16 rebounds were the most by any French player since 1994. The 3 blocks were in there for good measure.

Stats Don't Lie: USA had only 11 turnovers, but France used them to get 22 points, while the defending champs only managed to score 11 points from 12 French turnovers.

Bottom Line: France are back to the top four and have a glorious chance to lift the trophy in Beijing now that they have sent the winners of 2010 and 2014 to the Classification Games 5-8. For the first time since 2002, USA will not be on the podium; for the first time since 2006, they lost a game in the World Cup; and for the third time in the history of this competition, they will not win the event in Asia (5th in Philippines in 1978, 3rd in Japan in 2006). ''I don't know where this will end, but we will enjoy it'' - Argentina's Facundo Campazzo 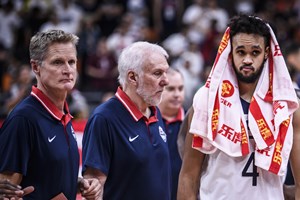