BEIJING (China) - France got the better of Australia, 67-59, in a see-saw encounter in the Third-Place Game at the Beijing Wukesong Arena to bag their second consecutive top three finish at the FIBA Basketball World Cup.

Just like in their Semi-Finals loss to Argentina, the French slogged through another slow start in a Second Round rematch with Australia, but this time Les Bleus mounted a successful rally late in the third quarter to pull the rug from under Australia and repeat the success of Spain 2014.

As Rudy Gobert and Frank Ntilikina struggled, coach Vincent Collet turned to Nicolas Batum, Nando De Colo, Vincent Poirier and back-up point guard Andrew Albicy in their stirring comeback from as many as 15 points down in the second half.

De Colo led France with 19 points, while Evan Fournier added 16. Albicy stepped up in a big way, hitting three triples in the fourth quarter to boost France's comeback effort. The Boomers were paced by 17 points from Joe Ingles.

Turning Point: Australia opened up what seemed like a commanding 15-point lead, 38-23, after Joe Ingles drove on Utah Jazz teammate Rudy Gobert and hit the ensuing bonus free throw, but an unsportsmanlike foul by Boomers guard Chris Goulding moments later killed the Aussie momentum and energized the French. Since Goulding's critical foul, coach Collet's side would then outscore Australia, 39-17, the rest of the way.

TCL Player of the Game: Nando De Colo came off the bench and provided a big spark for France, scoring 14 of his 19 points in the second half just when France looked on the verge of folding. Aside from scoring, De Colo also added 3 assists, 2 steals and 3 triples to his stat-line.

Stats Don't Lie: The last time these two teams met, France lost the rebounding battle 30-23. This time around, Les Bleus did a much better job, outrebounding Australia, 38-36. In addition, when their starters sputtered, France's second unit carried much of the scoring load. The French bench outscored their Boomers counterparts, 38-9, with all but two points coming from the trio of De Colo, Albicy and Poirier.

Bottom Line: For the second edition in a row, France finished on the World Cup podium, bringing home a medal and ending their campaign in China on a very strong note.

Australia finished top four at the World Cup for the first time, but as this is their second time losing in the third-place game after also falling short in Rio 2016, the Boomers have some soul-searching to do.

They Said: "Huge congratulations to France. It's tough. We just entered the locker room, and you could hear a pin drop. To everyone in Australia who supported us, it all means the world to us. We gave it everything we had. To drop the last two games is never what you want, but we fought to the very end with pride and with passion. I couldn't be prouder of the team we had and the guys beside us every day." - Australia guard Mitch Creek

"The biggest hurt comes from having a group of guys who are so committed and passionate to play for the country because they want to rep Australia on the world stage and do something special. To see the hurt in those guys, that's the bit that's hard to overcome. There's so many people involved in basketball in Australia who were hoping for a medal and you want to win for them, but unfortunately, we weren't able to get that done." - Australia head coach Andrej Lemanis

"For sure today was a great comeback, but we deserve where we are now. Australia played a real good game, but we never gave up and we stayed together. This made the difference, and this was really good for us." - France guard Nando De Colo

"It's something very special and important because we did it after a difficult first and second half. Many other teams could have given up, but we stayed focused and never gave up. Suddenly when it was looking done for us, we started to play much better on offense and defense. At half-time, we said that we just had to find some execution on offense. We started to move the ball better in the second half and that's why we won this game." - France head coach Vincent Collet 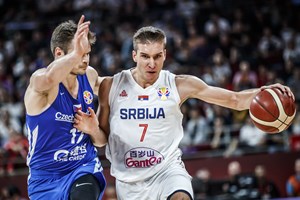 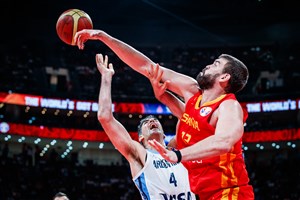