World Cup 2019 hosts China were at the forefront of a slew of brilliant performances. Former Houston Rockets center Zhou Qi, in particular, imposed his will, successfully recording back-to-back double-doubles in the final Asian Qualifiers window. He was also the first Chinese player combining for 30+ points and 10+ rebounds in a single game in these Qualifiers after putting up 32 points, 10 rebounds, 4 steals and 4 blocks against Syria. He joined compatriot Yi Jianlian as the only two players in the Asian Qualifiers to have made 4+ blocks and 4+ steals in a single game.

The Syrians, on the other hand, also had something impressive to contribute, grabbing 20+ offensive rebounds for the fourth time in the Asian Qualifiers - the highest number for any Asian national team.

Aside from Zhou Qi, other East Asia big men who hogged much of the spotlight on the final Asian Qualifiers game date were Korea's Ra GunA and Japan's Nick Fazekas.

Ra tallied his eighth double-double (fifth in a row dating back to the fourth window) in ten Asian Qualifiers contests with a 25-point, 11-rebound performance in Korea's comeback win over Lebanon, 84-72. This was Ra's sixth game recording 25+ points and 10+rebounds, which is the most among all Asian players.

Fazekas, for his part, collared 19 rebounds in Japan's lopsided 96-48 victory in Doha, Qatar, which was the second highest single-game total in the entire Asian Qualifiers right behind Iran's Hamed Haddadi, who had 20 rebounds against Kazakhstan way back in the first round. This was also his fifth game to breach the 20-point barrier in just six appearances for the Akatsuki Five.

Over in Astana, Kazakhstan, Philippines center Andray Blatche had a performance to remember. Blatche spearheaded the Filipinos' payback win over the Steppen Wolves with a scintillating 41 points, 13 rebounds, 4 steals, 2 blocks and 5 three-pointers. He joins an elite cast of only three players who have scored 40+ points in a single game in the entire Asian Cup Qualifiers, the other two being the aforementioned Ra and Fazekas. This was also Blatche's sixth game grabbing 12+ rebounds, which is the most among all Asian players in the competition.

The bigs weren't the only ones who made a ton of noise in the final window, though. Jordan's Dar Tucker, for one, has scored 20+ points in his last five consecutive matches in the Asian Qualifiers, notching 25 points in a massive win over New Zealand. Only Tucker and Iraq's Demario Mayfield have combined for 25+ points, 10+ rebounds and 8+ assists in a single game in these Asian Qualifiers.

Meanwhile in Tehran, Iran's Mohammad Jamshidi had his third straight 25+ point game in the Asian Qualifiers, putting up 25 points in Team Melli's triumph over Australia. This is was huge for Jamshidi who never scored more than 11 points in his first nine appearances in the competition. He was a major factor in Iran's being able to clinch their third World Cup appearance. 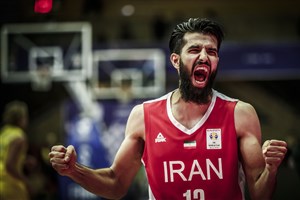