First of all, the undersized 1.98m power forward has to battle all game against opposing players who are all taller than him.

"I really just have to give my 100 percent. They're big but I need to use my quickness and 100 percent heart," said Pingris after collecting 10 points, four rebounds and one steal in Philippines loss in the Group B opener in Sevilla.

It's Pingris' heart and hustle that Philippines coach Vincent 'Chot' Reyes appreciates so much.

"Marc Pingris as a player has no skill. He can't shoot from the outside. He's a very average ball-handler. He's a great rebounder for the Philippines. Being 1.98m in the Philippines is tall, but here he's overmatched against all the power forwards he faces. Yet, he's one of the most important parts of our team, and his only skill is hustle," said Reyes.

"He works hard. Balls which you think are impossible to get to, he gets to. You'll think it's impossible for him to defend the opposing team's guy, and he'll defend him. He'll do that. That's it, that's his skill. I believe as a coach that hustle is a talent, hustle is a skill. And that's what he brings us, just an incredible work ethic and a never-give-up fighting spirit."

That never-give-up spirit really shouldn't be a surprise considering how hard Pingris had to fight to get here and how amazing it is that he is playing in front of 3,500 people at the World Cup.

Pingris' French father abandonned him and his Filipino mother very early in his childhood, leaving them basically with nothing. His mother was a vendor in a wet market and Pringris as a kid helped her selling fruits, fish and whatever you could think of.

"They were so poor that they had no place to live in. They slept right in the market," Reyes told.

"He had a thin piece of sack which he laid on the floor and that was his bed in the marketplace. But because of his French father he became 1.98m, and in the Philippines that's tall."

That helped Pingris go to college in Manila but he was forced to quit school and play commercially to support his sickened mother. He played in the Philippines Basketball Association (PBA) and was good enough to make the national team, and the rest as they say is history.

"I want to say thank you to the Lord. He gave me the opportunity to play basketball here," said Pringris, who got emotional talking about his journey to Spain.

Pingris eventually married an actress and has gone from a humble beginning to a comfortable life in Manila. He even found his father in France and has formed a solid relationship with him.

Reyes recalled a train ride with the team in Spain shortly before the start of the World Cup.

"We were in the train car where they were serving the food, and we are having nice coffee and cola and admiring the countryside. (Pingris) turned to me and said 'Coach, imagine me. I was just selling watermelons and now I'm here, in Spain, in this train. From selling watermelons and sleeping in the middle of the market and now I’m here in these nice hotels in Spain, in these great surroundings,'" Reyes said.

If only the ending had been a bit different. 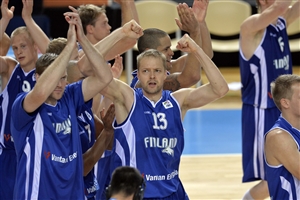