New Zealand never allowed Australia to hold on to a big lead for very long and continuously rallied back to make it close, but could never get over the hump. A devastating 19-0 run to end the first quarter built a big enough lead for Australia to close out for the win and claim their first ever FIBA U18 Asian Championship title. Kody Stattmann was the leading scorer for Australia with 17 points, but the champions got contributions from all around the roster en route to their win.

In the battle for 3rd place, China exacted their revenge on the Philippines with a 76-57 win that saw them lead from start to finish. Wang Quanze had his best game of the tournament with 27 points and 14 rebounds. The big man also displayed great shooting range, going 4/10 from downtown.

In the classification games, Japan edged out Iran with a 60-58 entertaining bout to claim 5th place and Bahrain claimed a historic 7th place on a 100-93 win over Korea.

The final standing of the FIBA U18 Asian Championship: 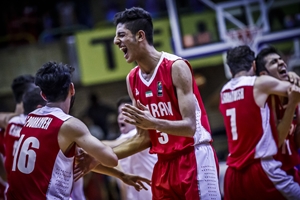