The best 20 men's and women's teams in the world – including the Belgian 3x3 Lions, the Belgian 3x3 Cats and defending champions United States and China – will compete in the Crelan FIBA ​​3x3 World Cup from June 21 to 26 in Antwerp.

For several years now, the Flemish government has been focusing on attracting and supporting top events with social, reputational, and economic value for the region through EventFlanders. Last September, the World Road Cycling Championships took place in Flanders, spread over 4 host cities, and in the autumn of 2023 both the World Breaking Championships (Leuven) and the World Championships in Artistic Gymnastics (Antwerp) are on the program. With this World Cup in one of the new Olympic sports, Flanders and Antwerp are taking a big new step.

“In the shadow of the majestic Antwerp Cathedral, Flanders welcomes the 3x3 Basketball World Cup with open arms,” says Flemish Minister of Sport Ben Weyts. “This contemporary and dynamic urban sport will stimulate and inspire young people, some of whom would otherwise not participate in sport. I strongly believe that the World Cup will provide added value for the further development of basketball in Flanders.”

“Our Flemish cities are creative hotspots where young people can also fully enjoy themselves. With the 3x3 Basketball World Cup, we have found the perfect springboard to showcase these various assets to the international youth and to convince to visit Antwerp and our many other beautiful cities. “In the run-up to the championship, we will show Flanders to the world as a 'must visit' destination”, says Flemish Minister of Tourism Zuhal Demir.

Right in the middle of the historic center of Antwerp, the main area will be located on the Groenplaats with a grandstand for 1800 spectators. The warm-up area, with a stand for 300 fans, will be built on the Grote Markt. Admission to the event is free. Those who want to be sure of their seat in advance for the group matches of the Belgian 3x3 Lions (Tuesday & Thursday) or the Belgian 3x3 Cats (Wednesday & Friday) or for the quarterfinals (Saturday), semi-finals or finals (Sunday) can reserve a ticket on the official website by paying €7. You will also receive two vouchers to have a drink in the public plaza next to the main court on the Groenplaats.

Basketball will not only take place at the Groenplaats and the Grote Markt. During the Crelan FIBA ​​3x3 World Cup, the basketball squares of the past will also be revived on Sint-Jansvliet and Sint-Andriesplaats with, amongst other things, a neighborhood sports tournament and the Antwerp preliminary round of the Crelan 3x3 Masters, the officially recognized Belgian 3x3 basketball championship.

Kamil Novak, FIBA Executive Director Europe, is excited about the location in the middle of the city. “One of the main missions of 3x3 is to bring basketball to the heart of the cities, in front of some of the most iconic landmarks, and the historic district of Antwerp promises to be one of the most spectacular urban backdrops in 3x3 history. We’re excited to be in such a young and dynamic city and region, for what will be the first World Cup after 3x3's Olympic debut in Tokyo last year.”

Antwerp Mayor Bart De Wever said: “As the sports capital of Flanders, Antwerp has invested heavily in urban sports in recent years. The 3x3 Basketball World Cup fits in perfectly and puts us even more on the map as a dynamic urban hotspot in the heart of Europe. Thanks to the World Cup, we will immerse Antwerp for a week in the unique, accessible atmosphere of 3x3 basketball. This vibrant event not only ensures that fans all over the world turn their eyes to our city, but also gets Antwerpers moving themselves.”

Antwerp Alderman for Sport Peter Wouters: “Besides a nice tribute to the long tradition of Antwerp squares basketball, the 3x3 basketball World Cup promises to be pure promotion for this hip and spectacular branch of sport. With Sporting A, we are also using this World Cup to bridge the gap between this street variant and the regular club activities of the many Antwerp basketball teams. That is why we are committed to an activating preliminary phase, including initiations in schools, events on neighborhood squares and a 3x3 offer in SPRK, our urban hall in Park Spoor Noord.”

“The Crelan FIBA ​​3x3 World Cup in Antwerp fits perfectly within our policy vision: with top sport and top sport events we create a locomotive and catalyst for basketball in Flanders”, says Koen Umans, chairman of Basketball Vlaanderen. “After the Olympic Games, this World Cup is the second major event that will put Belgian 3x3 basketball on the map. As a federation, we are therefore happy to make the transition to recreational sports, for which numerous initiatives are being developed. 3x3 Basketball is our answer to the unfettered athlete's question. It is a huge opportunity for basketball and for our clubs to remain socially relevant in a changing society. With 3x3, we have the opportunity to appeal to many new audiences and drastically reduce member dropout.”

In collaboration with MOEV, there will be a school competition, the finals of which will be played at the Groenplaats. Wheelchair basketball players can also give their best on the main court at the Groenplaats. In addition, the various squares serve as a location for 3x3 Basketball Camps and free 3x3 initiations.

Also in the run-up to the Crelan FIBA ​​3x3 World Cup there is a lot happening. In the coming weeks and months, for example, 3x3 initiations will take place in various primary schools in Flanders. Anyone who has completely got the basketball bug will soon be able to get started with Hoops. This new app is the basketball platform to challenge your friends and other teams and keep score, stats and leaderboards at any given playing location. With Hoops you can easily and quickly find all the basketball courts in the area.

To give 3x3 basketball an extra boost, an official club competition will start in April. The first games will be played on April 16 in Lier. This is followed by match days in Melsele (May 14), Zonhoven (May 22) and Asse-Ternat (May 29). 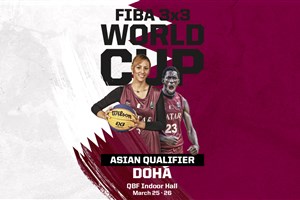 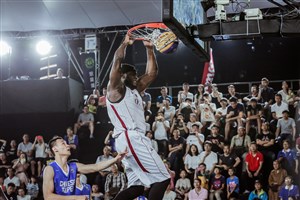 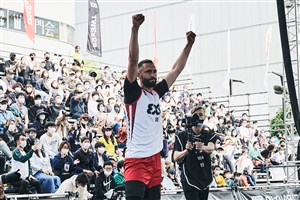 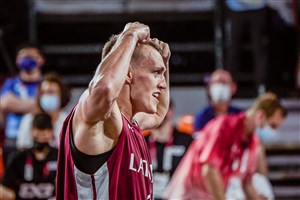 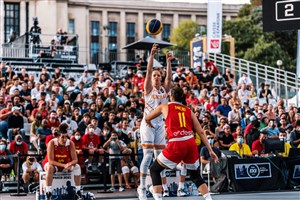