In the last game of the final window of AmeriCup qualifiers, Venezuela dominated Chile 61-42 to edge out Argentina at the top of Group A. Chile needed a win to book their ticket into the 2022 tournament, but instead, it will be Colombia that is headed to the event after they topped Argentina and had everything go their way on Monday.

Venezuela used a balance attack to victory as Jose Vargas scored 10 points on 4-of-7 shooting, Nestor Colmenares put up eight points and grabbed a ridiculous 18 rebounds and Heissler Guillent dropped 13 points. Nico Carvacho (12 points and 16 rebounds) returned to form for Chile after his shaky outing vs. Argentina, but he received very little help from his teammates on the offensive end of the floor.

It was obvious what Venezuela’s game plan was heading into this matchup as they wanted to win with defense and rebounding. And that’s exactly what they did, controlling the paint, out-rebounding Chile by 20 boards and grabbing 15 total offensive caroms.

Defensively, they limited Chile to 13 percent from beyond the arc and held them to less than 10 points in both the first and third quarters. While the Chilean side was able to cut Venezuela’s lead down to nine in the third period, it wasn’t nearly enough to overcome their own inconsistencies and lack of flow offensively.

Overall, this game spoke volumes to the drastic progress that Venezuela has made throughout qualifying. Argentina was favored to have the most points in the group, but Venezuela spoiled the party with toughness, and even won two games in this window without leading scorer Michael Carrera.

That speaks to the work of Gregory Vargas, Nestor Colmenares and Heissler Guillent. Vargas -- who surprisingly only had four points in this game -- and Guillent have done their best work in the scoring department, while Colmenares has been a beast on the interior.

Venezuela (5-1) will now look forward to the 2022 AmeriCup, where they will again be an under-the-radar squad with a chance to build on their impressive performance over the last year. If they have a similar roster, expect them to make more noise in the field due to their confidence and momentum. Meanwhile, Chile (1-5) put up a good fight in the second half of this game, but their inexperience on the biggest stages of international hoops showed. 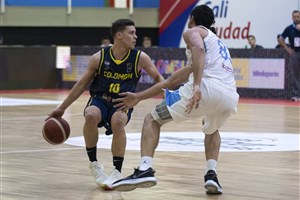