BUDAPEST (Hungary) - France and Russia won the third edition of the FIBA 3x3 U23 Nations League at the World Urban Games in Budapest on September 13-15.

In the men's category, France went back-to-back after defeating Russia in the final. Franck Séguéla and Timothé Vergiat paced Les Bleus with 7 points each in the title game. Russia's Dmitrii Cheburkin put up 9 for the runner-ups, who had were undefeated before the final despite playing the entire event without substitute. Cheburkin was named MVP of the competition after largely dominating the scoring charts (54 points in 5 games).

Ukraine won bronze after defeating Belarus in the 3rd place game (18-16). The medals were handed out by Paul Baumann, the son of the late Patrick Baumann, former GAISF and FIBA President.

In the women's division, Russia dethroned reigning champs France after a nail-biting 16-13 final. Olga Frolkina led the Russians in scoring with 6 points in the final and Lisa Berkani had 4 for the runner-ups.

China won bronze after defeating the Netherlands in the 3rd-place game (21-9). GAISF President Raffaele Chiulli awarded the medals in the women's category.

This was the third edition of the 3x3 U23 Nations League, which was launched to offer an opportunity for the future talents to hone their skills in preparation for the FIBA 3x3 World Cup, multi-sport games and future Olympic Games. 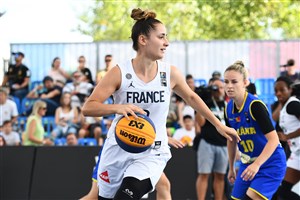 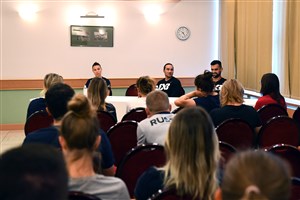