MIES (Switzerland) - All eyes will be on Sofia, Bulgaria, on Friday, March 6, when the draw takes place for the FIBA U17 Basketball World Cup 2020.

The 16 teams taking part, according to the draw principles, are divided into four pots. Based on the results from the FIBA U16 Continental Championships 2019, qualifying  for this event, the seedings are as follows:

Following the cancellation of the FIBA U16 Asia Championship, the qualification of the Asia/Oceania teams for the FIBA U17 Basketball World Cup 2020 is based on the FIBA World Ranking Youth Men, presented by Nike. Three of the four participants from the region are known with Australia (#11), China (#14) and Korea (#19) qualified as the best-ranked countries.

As Japan and New Zealand have an identical number of points in the ranking (#27 with 65 points) and are tied for fourth place in Asia-Oceania teams, the fourth qualification spot will be decided by games between the two played at a neutral venue and on a date between now and the start of the World Cup.

The draw will be streamed live and can be watched on FIBA's Youtube channel.

The United States have won all five editions of the FIBA U17 Basketball World Cup, which was first played in 2010. 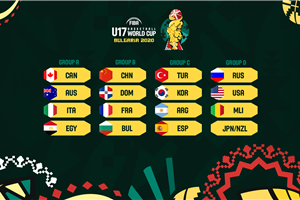 Draw results in for FIBA U17 Basketball World Cup 2020