Speaking in the wake of the USA winning the world title for the 10th time, Stewart was already looking forward to the next major global event.

"Now this World Cup is completed, the next thing we're looking forward too right away is Tokyo," she declared. "I'm sure it is going to be an amazing Olympics and for USA basketball, I think it is just making sure we are ready."

USA head coach Dawn Staley knows all about the Olympic Games as a player and assistant coach, which means she is anticipating the big event with more relish than most.

"We work hard but I know a lot of people think it's easy to win trophies time and time again. But there has to be the sacrifice of the players coming here a little beaten up from the WNBA season.

"However, they make the commitment and our best players showed they wanted to represent USA in this World Cup and now we want to continue our winning tradition at the Olympic Games too."

Meanwhile veteran guard Sue Bird has hinted she will be in the running to extend her glittering career.

"Given the chance, I would still love to play in the Olympics," she said. "A lot has to happen for somebody at my age, it's more about not if I'm willing it's about literally if I'm able to play - so we'll cross that bridge when we there.

"I would love to play in the next Olympics if it works out." 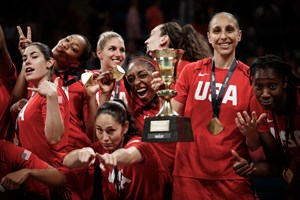