WURZBURG (Germany) - Dinamo Sassari clinched their first-ever European trophy with clinical late-game execution, locking in the title with an 81-79 second-leg victory against s.Oliver Wurzburg on the road in Germany on Wednesday.

Having also won the first of the two contests in Sardinia, Gianmarco Pozzeco's men triumphed 170-163 on aggregate to keep the FIBA Europe Cup trophy in Italy for another year.

Turning point: Much like in the first leg of the Final, Wurzburg dominated the proceedings in the first half, but Dinamo took over the game in the closing stages of the contest. Having trailed by as many as 11 points at 57-46, the Sardinians got themselves back into the game with a 7-0 run and went on to finish the fourth quarter strong.

Triumph for @dinamo_sassari, as they claim their first ever #FIBAEuropeCup trophy! 🏆

Congratulations to the Sardinians! 👏👏👏 pic.twitter.com/s2P19xUkKf

Game hero: After a quiet performance in Sassari, Dyshawn Pierre was the biggest difference-maker in the second leg with 19 points and 7 rebounds, converting 8-of-14 attempts from the field.

Stats don't lie: Points in the paint tell the story of the game, with the visitors paving their path to victory mostly with close-range conversions. They outscored Wurzburg 46-28 in the painted area.

They said: "Congratulations to Wurzburg, they played almost perfect games. They deserved to win, but this is basketball. One team has to win and the other has to go out without victory. In the end, we were a little bit, and I repeat – a little bit, better than them and we won the game. If it were a football game, this could have been a tie. I never saw a coach win games all by himself, never in my life. All the time it's the players who win the games. You have to be at the right club and we've got an unbelievable club. Above everything, it's the club, then it's the players and I'm the last one." – Dinamo Sassari head coach Gianmarco Pozzecco

"It's something we were trying to reach, we've been playing in Europe for seven years. We tried to reach this important trophy and we did it this season. It wasn't easy, because the season didn't start so well. We had some problems and changed the coach in February. After that, we started to play good basketball and trust one another, play like a team. I think that was the difference and helped us win this important trophy." – Dinamo Sassari forward Giacomo Devecchi

"The defensive stops we got changed the game. For a while we were just trading baskets and the gap probably remained the same. Once we were able to get some consecutive stops, we knew we were going to come back and win the game. Defense was the main thing. We know we can score, we're one of the highest scoring teams in the league. That wasn't the problem. I knew if we just stayed in the game and got some stops, we could win the game." – Dinamo Sassari forward Rashawn Thomas

"First of all, congratulations to the team of Sassari and my dear friend Gianmarco Pozzecco. He's doing a great job throughout this European campaign. I think they deserved the win and I think we would've deserved it too. We committed three offensive fouls in a row. It took our momentum away. That was the time where we could’ve opened up the lead and made a run for winning the trophy. In the end of the game, we fell a little bit short on gas. We're obviously one or two players short, with Johannes Richter and Jordan Hulls out." – s.Oliver Wurzburg head coach Denis Wucherer

"It was tough, for our team and for our guys, but more than anything for the fans, who came out and cheered really loud. They really showed up and we just couldn't get it done. It was a hard-fought game and it was tough without Jordan [Hulls]. We can't make excuses, but that's sometimes how the game goes unfortunately. We just have to learn from our mistakes and move on and be better going forward." – s.Oliver Wurzburg forward Devin Oliver 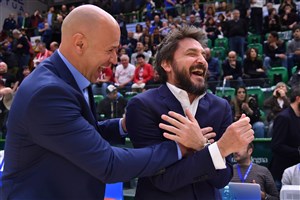