SOFIA (FIBA U20 European Championship, Division B) - Only six teams are unbeaten after the second day of action in Bulgaria, with Russia surviving a close one against Hungary.

It was Mark Tikhonenko who was the hero for 2-0 Russians. His three-pointer heading into the final minute settled the final score at 69-68. Gaspar Kerpel-Fronius had a chance to win it for Hungary, but he missed a two-pointer ten ticks before the end.

Grigory Motovilov finished with 26 points, as the Russians overcame Hungary's 18 offensive rebounds and 21 turnovers of their own. Russia joined Czech Republic at the top on 2-0 records in Group C, after the Czechs had won comfortably, 99-46, against Armenia.

Over in Group D, Georgia had to work overtime against Kosovo. Dion Haxhosaj's jumper tied the score at 68-all at the end of the fourth quarter, but Georgia found a hero in David Aphkhazava - a steal at +2 late in the overtime, followed by an assist to put 81-77 up on the scoreboard. Bunjaku and Janjeva combined for 52 points for Kosovo, Georgia got 25 in 26 minutes from Aleksandre Phevadze.

Arguably the biggest game of the day happened in Group A. Latvia stormed to 2-0, dropping Belgium to 1-1 with a 63-60 win. Darnell Snyers tried from beyond the arc  with the clock showing four seconds, but could not get it to drop.

Arturs Strautins was the best Latvian player out there, with 16 points and 12 assists. Tim Lambrecht's 22-point, 12-rebound double-double went to waste for Belgium.

The teams will be in action on Sunday, before taking a day off on Monday.

Top scorer of the day: Valon Bunjaku fueled Kosovo with 28 points, beating Azerbaijan's Endar Poladkhanli by a single point. Ironically, both Kosovo and Azerbaijan lost their games to Georgia (81-77) and Belarus (89-62), respectively, despite high-scoring efforts by single players.

Top rebounder of the day: Akbar Mammadov is a 6ft8in (2.02m) power forward for Azerbaijan, and he used all of that power to set a new tournament-high in rebounding with 14.

Top passer of the day: David Aphkhazava was in charge of distribution as Georgia defeated Kosovo. Aphkhazava dished out 9 assists in 36 minutes of action, including 3 in overtime.

Top thief of the day: Ziga Jurcek had a tough shooting day for Slovenia against Slovakia (71-49), but made up for it with 4 steals, tying Albania's Joans Gjeci for the day-high effort. Gjeci stole the ball four times in a defeat to the hands of Bulgaria, 84-54.

Top blocker of the day: Ten players had 2 blocks on the day, and two of those ten are playing for Slovenia. Jurij Macura and Urban Oman combined for 4 assists against Slovakia. 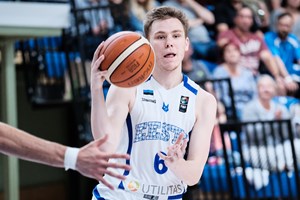 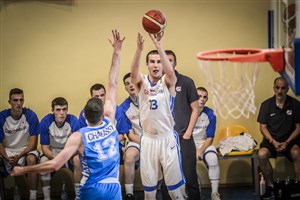 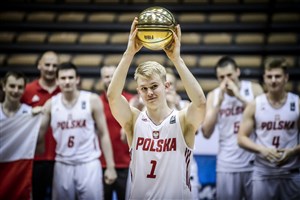 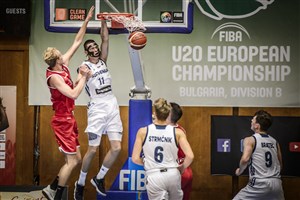