Dominance and superiority: Predrag Stojakovic and the last Yugoslavian gold

MUNICH (Germany) - Perfection is not attainable, but if we chase perfection we can catch excellence. The old Vince Lombardi quote seems perfect to describe the 2001 FR Yugoslavia team.

They weren't supposed to be that good. Yugoslavia was already flirting with excellence through the 1990s, winning the FIBA EuroBasket in 1995 and 1997, splitting those two gold medals with a silver from the 1996 Summer Olympics, and adding more FIBA Basketball World Cup glory with a title won in 1998.

But as years passed, it was clear that Vlade Divac, Dejan Bodiroga, Sasha Djordjevic and Predrag Danilovic weren't getting any younger. Newer, younger firepower was needed to keep the nation at the top. 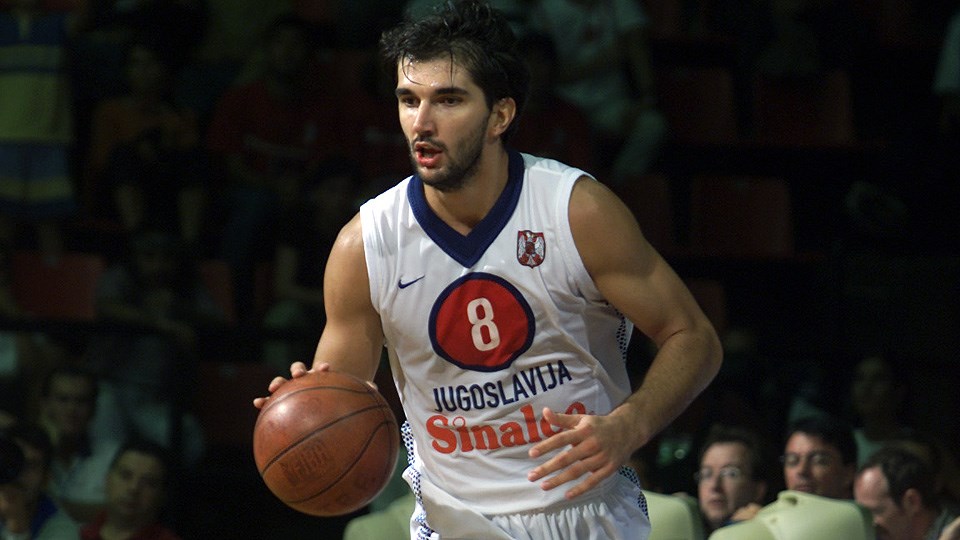 A Quarter-Finals exit at the 2000 Summer Olympics was a sign that a change was coming. It turned out to be a change for the better, since Yugoslavia swept the field in FIBA EuroBasket 2001 to pick up another gold, winning all but one of their games by double digits.

"It's been almost 20 years already! But when I think about 2001, I think about how dominant and superior we were, thirsty and hungry to get one back after the debacle of the 2000 Summer Olympics," Predrag Stojakovic told FIBA.basketball, thinking back about that hot summer in Antalya and Istanbul.

"Dominant and superior" sounds about right.

Yugoslavia went +14 against Croatia, +13 against Germany and you need to get your calculators out to figure out the margin against Estonia in a 113-58 demonstration of power. Latvia suffered a 114-78 defeat in the Quarter-Finals, Spain were bested by 13 points in the Semi-Finals, and it was only the hosts, Turkey, who managed to stay in single figures against Stojakovic and his companions, losing the Final 78-69.

A nine-point win being the closest encounter? That's what excellence means.

"Our team was really strong, really deep. I'm not sure I can even call our bench unit a true bench unit, because we are talking about guys who were the main protagonists in their clubs, played on really high levels of professional basketball, so we had a nice balance to our squad with coach Svetislav Pesic as the conductor to our orchestra," the MVP said.

Stojakovic averaged 23.0 points per game in 2001, connecting on 18-of-35 three-pointers over the six games. Even when the opponents slowed him down like Turkey did in the Final, holding him to 6-of-14 shooting, he had teammates to cover his back. Enter Vlado Scepanovic, author of a game-high 19 points in the Final.

Can you get this one right? 🤔 #EuroBasket

"That's what I said about the role players not really being role players, but being high level players in their club careers. Šćepo used his opportunity perfectly in the title game, Dejan Bodiroga accepted the role of the sixth man, Sasa Obradovic was the veteran point guard who gave us a lot of calmness when we needed it... We were just supposed to get the team through a transition from the golden generations into something new, but with so much support from older guys, and so much motivation from everybody, we turned out to be a well balanced squad," Stojakovic explained.

It turned out to be a team so near perfection. One of the most dominant in the history of FIBA EuroBasket, but their sharp shooting leader wants no comparison through different eras of basketball.

"FIBA EuroBasket was a different competition back then. We won it in just six games, you know that different formats have changed and it now seems that more teams have a chance to win it, more teams have a chance to bounce back after a bad game because there are more games, obviously. We had three games, then straight to the Quarter-Finals, Semi-Finals and the Final."

In case you don't feel like the 2001 Yugoslavia were the most dominant team in recent history, you are probably pointing the finger towards one of the Spanish squads of the new millennium. Stojakovic had a first row ticket to the formatting years of the Spain as we know it nowadays.

"I remember thinking that the Spaniards left such a good impression on everybody in Turkey. After the first game, we all thought that. That was the beginning of their generation which ruled for the next 15 to 20 years... After all, they are still here, still enjoying what started back then. We beat them in 2001, we played them in 2002 again and we knew that they will be huge. It just goes to show that long-term investments and hard work that Spain put in their sports, their clubs, academies, camps, it all pays off. It only takes patience."

Spain finished in third spot in Turkey, right behind Yugoslavia and the hosts. The intimidating atmosphere of Abdi Ipekci is still in Stojakovic's head.

"2001 was also the birth of that great Turkish generation of players. Hedo (Turkoglu) was coming off his first NBA season, (Mehmet) Okur was there, our guy Mirsad (Turkcan), (Ibrahim) Kutluay... An interesting team, no doubt. They had the crowd behind them, and used it perfectly, all the excitement, the drive that the fans were giving them, they looked charged up. I remember their path to the Final was crazy, that game against Germany in the Semis... or against Croatia in the Quarter-Finals, it's amazing that they survived all of that and reached the Final."

But, they were powerless against Pesic's perfect boys, as was the rest of the world just a year later in Indianapolis.

With back-to-back trophies, the transition to the new generation was seemingly completed, and the nation would rule the world of basketball for years to come, right?

It turned out that 2001 and 2002 were the two last time that the blue, white and red stood atop the podium. 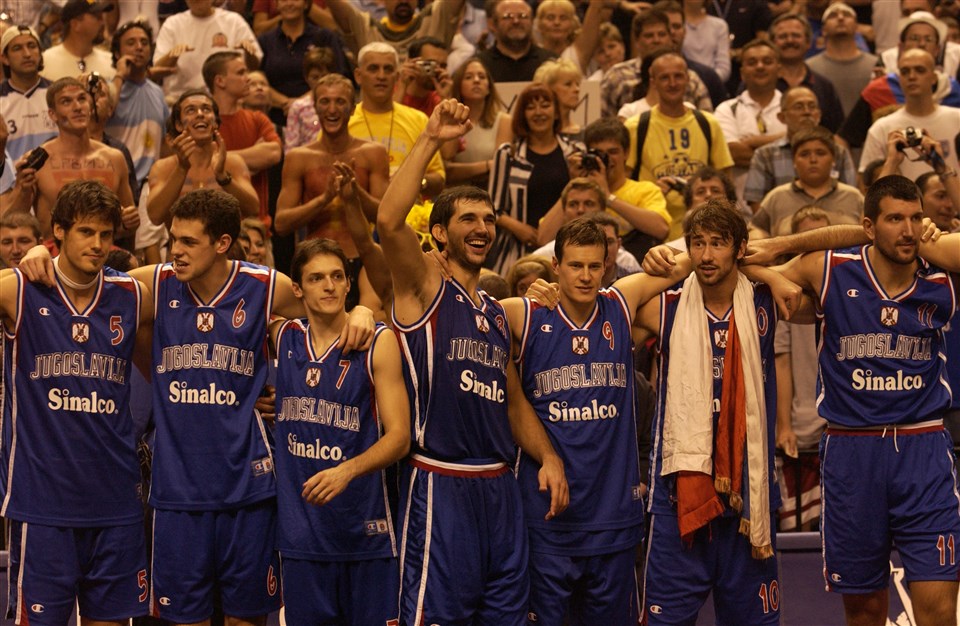 The order of the colors on the flag changed once Serbia and Montenegro parted ways. Serbia came close in 2009, 2014, 2016 and 2017, but the last step was always too high, whether the opponents were Spain, USA or Slovenia.

"There are so many factors that influence you in tournaments like these. We had the talents with Teodosic, Bogdanovic, Bjelica, but sometimes it seemed like we just needed a bit of luck on our side, too. In those Finals that they've played in the World Cup, the Olympics and the EuroBasket, it seemed that they got there while missing key players," Stojakovic said.

"I don't know if we should be worried about losing the Finals all the time, but when you look at the situation right now from a neutral stance - Serbian teams are always talented. Now it's just a matter of drawing motivation, getting everybody on the same page, enjoying what Nikola Jokic and Bogdan Bogdanovic can do over the next five to seven years together, and we need to take advantage of it, to finally pick up gold somewhere. FIBA EuroBasket seems like a good opportunity to do it. But it's a process. Tournament formats are always tricky, just one absence can change everything."

Not only has Stojakovic been a part of the last championship winning Serbian teams, but he was also the last Serbian player to be selected as the Most Valuable Player of a FIBA event, back in 2001. When Yugoslavia won the FIBA Basketball World Cup 2002, it was Dirk Nowitzki who picked up the award. How long will we have to wait for a Serbian player to pick up the MVP trophy?

"That's a tough question. Okay, Bogdan and Jokic have proved year after year that they have the quality to do it, but so many things have to go your way to do it. It's never about one or two guys. That's why the line between a win and a defeat is so thin. It's a really tricky subject to try and discuss," Stojakovic said.

He is absolutely correct. It wasn't about one or two guys with the 2001 Yugoslavia, either. Because after you stopped Stojakovic, you had to silence Dejan Bodiroga, Milan Gurovic, Predrag Drobnjak, Vlado Scepanovic, Dejan Tomasevic, Marko Jaric, Dragan Tarlac, Sasa Obradovic, Igor Rakocevic, Dejan Milojevic and Veselin Petrovic. Add coach Pesic to the equation, too.

As close as it gets to perfection. 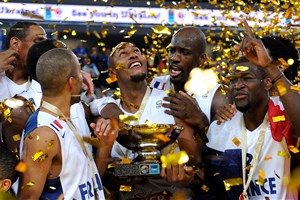 The story of Boris Diaw: Love spark in Zadar, sparkling gold in Ljubljana 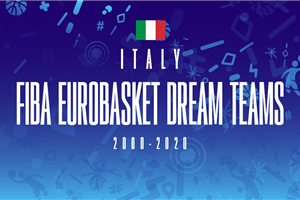