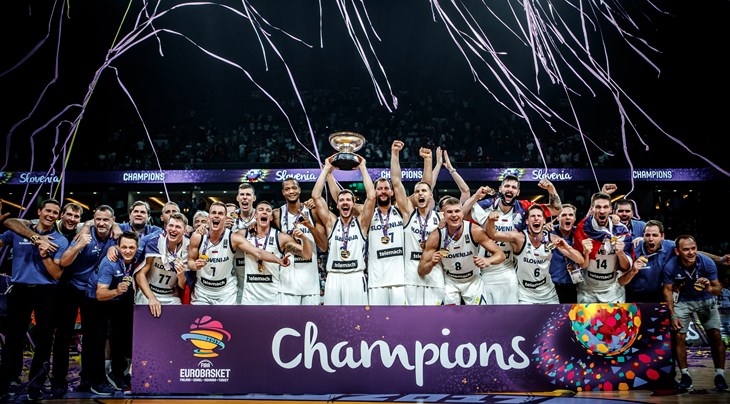 Turning point: Luka Doncic's injury threatened to derail Slovenia, who were up by eight midway through the third when the 18-year-old went down. Things further soured when Dragic suffered cramps and had to exit with the game in the balance. With scores level with just over two minutes left, Klemen Prepelic (21 points) hit a clutch shot followed by an Anthony Randolph (15 points) running jumper to give Slovenia some breathing space. They held on from there to cap off an unbeaten campaign - the first team to have achieved that feat since Lithuania in 2003.

Stats-don't-lie: The teams were almost deadlocked across most of the major statistics but Slovenia had an important 7-4 advantage in blocks. Big men Randolph and Gasper Vidmar combined for 6 rejections, including several key ones late.

Game hero: In his final international game, Slovenia captain Goran Dragic played a masterful opening three quarters to score 35 points to almost single-handedly give his team the edge. However, after expending so much energy, Dragic tired in the fourth before suffering cramps late. He finished with 35 points, 7 rebounds and 3 assists - and the tournament MVP presented by Tissot - in a fairy tale ending to his brilliant international career.

They said: "You want to play well in the Final. My teammates, all the coaches, they put me in the right positions. It's a team sport and I'm really proud of my teammates. It's an unbelievable feeling." - Slovenia captain Goran Dragic after leading his team to glory

"He was cramping on the sidelines. Goran wasn't available, it wasn't my decision. Goran's body was quitting on him." - Slovenia coach Igor Kokoskov talking about Goran Dragic cramping in the last quarter

"Slovenia deserve the Gold medal. I believe we went out of our game plan in the first-half giving them a lot of transition points. They (Slovenia) brought the NBA speed to this tournament. We are continuing with this level the last four years fighting for the medals, bringing home three Silvers. We are going to win Gold one day." - Serbia coach Aleksandar Djordjevic speaking after his team's loss in the Final

After a tight start, Dragic broke the game open with a scintillating 20-point explosion in the second quarter. He dominated an 11-0 run, which was highlighted by a breathtaking coast-to-coast dunk by Doncic.

Serbia looked set to be blown away but kept fighting as the game turned when Doncic hobbled off midway through the third quarter. Despite struggling with his shot, Doncic's all-round impact was stark and he had 8 points, 7 rebounds and 2 assists before disaster struck.

Serbia capitalized and eventually hit the lead midway through the fourth as the teams exchanged clutch buckets. After using so much energy early on, Dragic struggled in the fourth and was forced out of the game with cramps in the last minutes meaning Slovenia were without their two stars for the dying stages.

However, Slovenia held on and celebrated a historic first title triumph.

ON THE TOP OF EUROPE 🏆 pic.twitter.com/bMeqfTeOou