MILAN (Italy) - Danilo Gallinari sees no reason why Italy should not think big ahead of this summer's FIBA Basketball World Cup in China.

If the Azzurri avoid injuries in the build-up to the 32-team tournament - something they didn't do before FIBA EuroBasket 2017 when Gallinari suffered a thumb injury in a warm-up game against the Netherlands that ruled him out of the tournament - the team will be loaded with talent and experience as it goes into its first World Cup since 2006.

"IT'S A BIG OPPORTUNITY FOR ALL OF US, FOR THE WHOLE COUNTRY, AN ADVENTURE WE WANT TO LIVE."- Gallinari

"We can go all the way," Gallinari said in the Italian media. "The time has come for us to achieve something special. We're mature and as a group we shouldn't put limits on ourselves."

Italy had the look of a team that might reach the podium at FIBA EuroBasket 2015 when they defeated Spain in the Group Phase behind 29 points, 8 rebounds and 6 assists by Gallinari. He followed that up with a 25-point and 9-rebound performance in a victory over hosts Germany.

But Italy, after an 82-52 mauling of Israel in the Round of 16, came up just short in a thrilling Quarter-Final against Lithuania, despite Gallinari's 17 points and 6 rebounds as Jonas Valanciunas went for 26 points and 15 boards to power his team to an 95-85 overtime win.

NBA stars Gallinari and Marco Belinelli were both on the team for that EuroBasket and the following year at the FIBA Olympic Qualifying Tournament in Turin where they came up just short of reaching the Rio Games, this time falling against Croatia.

Basketball fans in Italy are hopeful that both Gallinari and Belinelli will end up on the team bound for China. Neither featured in the European Qualifiers but each has been in contact with coach Meo Sacchetti.

"Yes we've talked and it's all clear," Gallinari said. "It's a big opportunity for all of us, for the whole country, an adventure we want to live."

"WE CAN GO ALL THE WAY. THE TIME HAS COME FOR US TO ACHIEVE SOMETHING SPECIAL. WE'RE MATURE AND AS A GROUP WE SHOULDN'T PUT LIMITS ON OURSELVES."- Gallinari

And the World Cup has been a topic of conversation when Gallinari speaks to Belinelli.

"We talk about national team all the time," the 30-year-old said. "We're confident and excited to be there."

At the World Cup, Italy will take on Angola, Philippines and Serbia in Group D in the First Round and, if they finish among the top two, move on to the Second Round where they will face the top two sides of a Group C consisting of Spain, Iran, Tunisia and Puerto Rico.

Serbia reached the title games at the World Cup in 2014, the Rio Olympics two years later and at EuroBasket in 2017.

Both the Italians and the Serbians had their ups and downs in the European Qualifiers but did enough to reach the World Cup. Serbia promise to be formidable opponents.

"If all the best players from Serbia come to China, they will be the team to beat," Gallinari said. ''We just have to play the right way, the Australia way'' - Mitch Creek 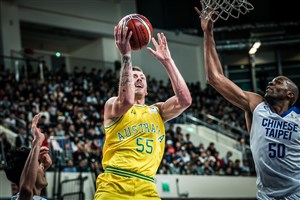