Last time the two teams met up, SPFC scored twice as much as their opponent, winning 94-47 against Universidad De Concepcion.

SPFC pulled ahead slightly once again to start the first quarter, with Jefferson William Andrade Da Silva leading all scorers with 14 points just 2 minutes into the second quarter, but Prinsloo refused to let UDEC have the same outcome as their last matchup and entered double digit scoring to start the 2nd.

Scoring almost as many points in one half as they did all last game, UDEC trailed 40-47 at halftime, with Brandon Moss adding 12 of his own for UDEC in the half, while both Corderro Bennet and Lucas Mariano added 10+ points each to keep SPFC ahead.

Gerson Do Espiritu Santo Junior also led both teams on the boards grabbing 6 rebounds in the half, 3 on both sides of the court.

Five minutes into the third quarter both teams were tied at 53, with UDEC pulling ahead to end the quarter ahead 67-60, behind Prinslooās effort both shooting and rebounding, but Da Silva and Mariano continued to be a dynamic duo offensively that kept SPFC lightly ahead.

Leading by 1 point with 7 minutes left to play in the final quarter, Prinsloo led all scorers with 22 points, helping keep UDEC ahead after outscoring the opposition 27-13 in the third.

SPFC held UDC to just 6 points in the first 8 minutes of the fourth quarter, while scoring 14 themselves, but with just over one minute to play in the match, SPFC only led by one point, a drastic change to their 47-point win in their prior matchup.

Back-to-back missed baskets from SPFC allowed UDEC to eat the clock down to the three second mark, and even with Prinsloo fouling out last second, UDEC's pressure on defense caused a miss 3-point shot at the buzzer and gave them their revenge win over SPFC.

Mariano and Da Silva combined for 40 of SPFCās points, but turnovers and second chance points allowed UDEC to get the advantage to take home the win.

The game gives UDEC their first win in the BCL Americas after 3 games played, heading to play SPFC once again on March 27th. 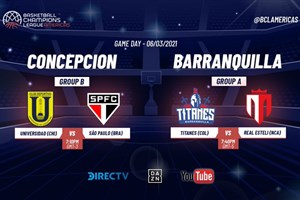 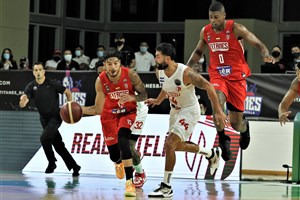