DONGGUAN (China) - The Group of Death provided one of the best games we've seen in a long time, as Australia powered through for a 108-92 win despite Canada's 37-point outburst in the third quarter.

Australia broke a number of record en route to triple digits. The 108 points were the most in a single game for the Boomers in the history of the FIBA Basketball World Cup, Joe Ingles dished out 10 assists, the most in a game by an Australian player since assists became part of the boxscore in 1994, and the team dished out 24 assists, another national record.

Canada did try to fight back from a 12-point deficit at the half, and a 37-point third quarter made it look like this was their game to win or lose. But Australia found another gear in the fourth and eased away to their first win in China.

Turning Point: The moment when Matthew Dellavedova decided to work on his three-point shot this summer. All the hard work paid of for the Australian point guard, and three of his six three-pointers on the day came in the fourth quarter, which put a lot of daylight between the teams.

TCL Player of the Game: Dellavedova, again. For the first time in his FIBA Basketball World Cup career, Matthew scored more than 20 points, finishing with a game-high 24 points and an ovation from the crowd in Dongguan.

Stats Don't Lie: Not much you can do when Australia have six men in double figures. Chris Goulding scored 16 in 18 minutes, Patty Mills finished with 15, Joe Ingles had 13 and 10 assists, Andrew Bogut delivered 12 and 9 boards, and Aron Baynes finished with 10 points. This was the first time that Australia had six players with 10 or more points in a FIBA Basketball World Cup game since 1978.

Bottom Line: Australia sent out a message - they are here to win the World Cup! Meanwhile, Canada are in more trouble than they wanted to be, because they are -16 in all potential ties with Australia, and have games against Lithuania and Senegal to come.

They Said: "Good to start the tournament with a win. In the first half, we showed that we can do some really good stuff and we also showed that we weren't where we needed to be defensively. Canada are a great team and they showed that while pulling back towards the end of the half. We weren't ready to go at the start of the third quarter. When you're playing Cory out of position, they can put points on the board quick. We got slapped in the face a little bit but we realized the situation that we were in and picked ourselves up and managed to get a good solid win." - Australia shooting guard Chris Goulding

"There are some things we did really well for some periods of the game, some of the defensive stuff was great and on offence, it is a high scoring game. They scored 23 points in the first five minutes of the third quarter and that is obviously something we have to go back and look at and try to fix going forward. In those five minutes, I was very pleased with the effort that we gave and it was good to be tested like that in a game that matters and found a way to just hold our nerve, get back together and start playing basketball and work in a way that benefits a solid win." - Australia had coach Andrej Lemanis 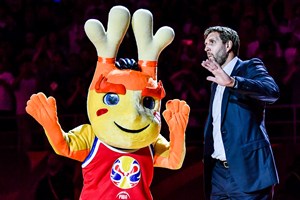 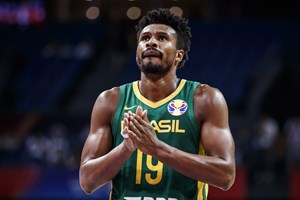