NANJING (China) - In a battle between two heavyweights of the basketball world, Australia outdueled France with a heart-stopping 100-98 victory to take the top spot in Group L heading into the Quarter-Finals of the FIBA Basketball World Cup 2019.

In a thrilling back and forth game that featured 15 lead changes, 17 ties on scoreboard and no one giving an inch, Patty Mills rose to the occasion with a clutch steal to deliver the win to the Boomers.

Down by one, 99-98 with 4.4 seconds left, France had a chance to win the game, but Mills' phenomenal defensive play saved the day for Australia.

The game displayed tremendous shooting from both sides with Australia and France delivering 58 percent and 57 percent respectively in a highly entertaining game.

Turning Point: In a game as close as this one, there wasn't a bigger play than Mills' steal that sealed the win. Mills is used to making  a living on the offensive side of the ball, but the sharpshooting guard showed his determination to tow the Boomers to the top of their Second Round group.

TCL Player of the Game:  Aside from his defensive gem, Mills continued his offensive brilliance, exploding for a team-high 30 points. Mills has scored 19+ points in his last four games with Australia in the FIBA Basketball World Cup. He scored 19+ points in only one occasion in his first seven games in the competition.

Stats Don't Lie: Both teams were hot from the outside but France could not keep up with Australia long-range barrage, hitting a scorching 13-of-27 shooting from the outside. It was a three-headed attack from the Boomers side with Mills, Aron Baynes and Joe Ingles combining for 74 points out of the 100 scored by Australia.

Bottom Line: Australia further solidified their status as one of the contenders of the Naismith trophy after a thrilling win over a tough France squad who was previously unbeaten in their first four games. The Boomers will face second-placer of Group K, Czech Republic, while France have a rendezvous with USA in the Quarter-Finals.

They said: "I am obviously disappointed. We made some unnecessary mistakes right at the end of the game, which we could have won. We have to stay positive moving forward there is still a lot to play for here in China." - France guard Nando de Colo.

"[On Aron Baynes’ performance] - He’s huge. That’s what he does for us. He’s a stretch five, who shots the ball really well. He is going to keep doing it for us and we are going to keep letting him shoot." - Australia big man Jock Landale. 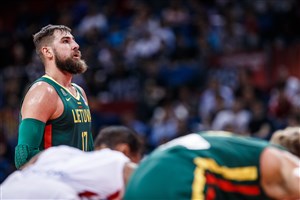 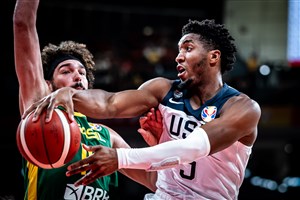