LUANDA (Angola) - Leonel Ditutala Paulo has represented Angola so many times on the international stage that he is not shy to admit that the upcoming FIBA Basketball World Cup 2019 in China will be his country's toughest challenge.

A 2008 Olympian and 2010 World Cup participant, Paulo insists that the eleven-time African champions not only currently face a slow transition process and team rebuilding, but they will also need to excel to overcome high-rising opponents Serbia, Italy and Philippines in Foshan's First Round Group D.

"THE WORLD CUP IS ONE OF THOSE BASKETBALL TOURNAMENTS THAT YOU DON'T WANT TO MISS, ESPECIALLY BECAUSE YOU HAVE A CHANCE OF LEARNING FROM THE BEST OF THE BEST PLAYERS AND COACHES"
- Paulo

And for a country who missed out the last two editions of the Olympic Games - after five straight appearances [1992, 1996, 2000, 2004 and 2008], it's imperative to start their Group Phase campaign - against Serbia on August 31 - the strongest way possible, according to Paulo.

Ivory Coast became the last of five African nations to qualify to 2019 @FIBAWC in China. Angola, Senegal, Nigeria and Tunisia round up the list. pic.twitter.com/Tsw9rKW26R

"Obviously, Serbia is a great team with many quality players and coaches. They are the favourite in our group, and it will be very tough for us, but we need to send a message from the start of the tournament. We have faced them before [at FIBA Olympic Qualifying Tournament 2016 ] and we know what to expect.

We'll take our chances against Italy - who like Serbia counts on number of NBA, Euroleague and some top European Leagues players - but in basketball anything is possible if you self-believe. As for the Philippines, they too have some good players, including Jordan Clarkson and Andray Blatche. They are from being the toughest opponents, but we'll see," Paulo reflected.

With that being, the 33-year-old, said, "I still believe that this World Cup is our biggest challenge in years. But I remain confident we can achieve good results. We want to return to the Olympics - but I must admit that other African teams like Nigeria and Tunisia are also well placed for a good World Cup campaign.

"Will they be better than us and secure Africa's automatic spot for Tokyo? I don't know. Those two countries are well coached, but I trust coach Will Voigt will be able to put us in a good position to have a great World Cup. We know coach Voigt's philosophy better now." Paulo explained.

"Obviously, if some of our younger players like Gerson Domingos, Gerson Goncalves, Bruno Fernando and Silvio De Sousa, just to mention a few, can come to the World Cup, they'll give us a huge boost, considering how fast they grew as players."

If Paulo is injury-free by the time of the World Cup, as he insists, the 1.98m (6ft6in) forward will proudly be making his second World Cup appearance after sitting out the 2014 edition in Spain due to an injury.

"It was a tough experience watching my teammates on TV. I wished I could be there with them and help the team. Hopefully, I'll be able to help my country this summer. The World Cup is one of those basketball events that you don't want to miss, especially because you have a chance of learning from the best of the best players and coaches." Over the past few years, Paulo - who is on the books of Angolan giant Petro Atletico de Luanda - used three different names on his shirt, leaving international commentators and fans somehow confused. "No, I haven't changed my name. My full name in Leonel Ditutala Paulo. I currently use Ditutala on my shirt as a tribute to my paternal grandfather. He's no longer with us, and I thought it was a humble way of paying my respects to him." 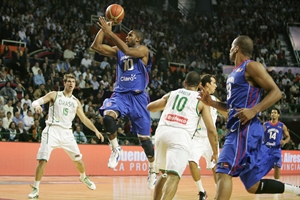 Dominican Republic hoping superstar Horford will be in China