Japan impress in pool stage at 3x3 U18 Asian Championships

In the women's category, Japan had a perfect 4-0 record in Pool B thanks to a hermetic defense, allowing just 7 points on average.The scoring was a team effort as their leading scorer Momoka Ishiyama only ranked 10th overall at the end of the pool stage.

Kazakhstan was the only other undefeated team in Pool A. Luiza Zukova already showed her range at home in Astana last month for the U18 World Championships. Apparently the other teams did not read the memo as she scored 28 of her 31 points (4th overall) from behind the arc on Friday and Saturday.

In the men's category, Japan had a mediocre record (2-2) but Kaiki Hojo provided some highlights, Kawachi Kodai showed unlimited range (17 shots from behind the arc in 4 games, 42 pts overall) and the team pushed U18 World Champs Qatar to a hard-fought 21-19 win.

Qatar's men were in fact the only undefeated team in the pool stage thanks to Al Hadji Bobo Magassi (28pts) and Alen Hadzibegovic (26pts) who had more dunks than the rest of the players at the tournament combined.

In Pool A, Malaysia had a strong 3-0 start but suffered a heartbreaking loss against Kyrgyzstan (20-21).

Malaysia star Yee Tong Heng topped all scorers in the first two days of competition with 44 pts, equally distributed from inside and outside the arc. Japan's sharpshooter Kodai currently ranks second (with 42) and Kyrgyzstan's Artem Mushtruev is next with 41pts.

The Quarter-Finals start on Sunday 24 July at 12.20 local time (GMT+8) and can be followed live on youtube.com/FIBA3x3.

Besides the men's and women's tournament, 4 players (2 men, 2 women) will compete in the final of the shoot-out contest. 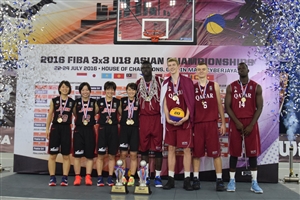