LUANDA (Angola) - Primeiro D'Agosto's Eduardo Mingas has become one of those rare cases happening across African basketball because the more seasons he plays the better he gets.

Keep in mind that he turned 40 five months ago.

"I AM HAPPY TO BE IN THE POSITION THAT I AM IN, BUT THIS IS MAINLY DUE TO THE SUPPORT OF MY TEAMMATES. AS A GROUP WE HAVE A MISSION TO ACCOMPLISH AND WE'LL DO EVERYTHING WE CAN TO ACHIEVE OUR GOAL."- Mingas

Now, take his performance against Smouha Sporting Club as an example. It was a do-or-die FIBA Africa Basketball League 2019 semifinal clash for the Angolan giants, who target their ninth continental ring.

With prolific scorer Manny Quezada being subjected to an intense defence from the Egyptians (he scored 13 of his 20 points from the free-throw line), Mingas - along with Andre Harris - was the answer as he sparked D'Agosto with his 23 points, 12 rebounds, three assists, and more impressively an 35 efficiency rate  in an 86-76 triumph.

But that's not all, his aggressive defence against taller and bigger opponents helped D'Agosto to stay on track.

He had the ability to better his team’s play system. His activities at the top position came in handy as they allowed Andre Harris, Manny Quezada or Armando Costa to take "open shots," on the wings, or Islando Manuel in the low position.

"I have been working extremely hard over to the past few years. I feel great, and I hope to continue this way a few more years," Mingas told to FIBA.basketball.

"The most importance thing is that you must always respect your opponent. You can't go to the game and think that you will win it just because you have the backing of your supporters and you play at home. It's necessary to stay focused throughout the game, and this attitude has helped me all these years. It's not just in this Final Four," he added.

Named MVP of the competition in 2014, Mingas recalls that playing at such high requires a lot of sacrifices, and "my message for the youth who aspire to succeed in basketball is simple: ''work hard, be coachable and study the game.''

"I am happy to be in the position I am now, but this is mainly due to the support of my teammates. As a group we have a mission to accomplish and we'll do everything we can to achieve our goal."

In the process, D'Agosto extended their FIBA Africa Basketball League 2019 campaign to a commanding 6-0 ahead of the final against Association Sportive Sale. 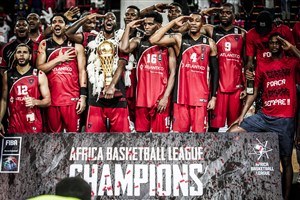