It was way back at the inaugural edition in 1953 when France last made it that far - despite having since found success at continental level and played in the Gold Medal Game at the London Olympics.

If France are going to do it, they must overcome a Belgium team who are flying, writing history and already claimed the considerable scalp of Spain during that breathtaking last Group phase encounter.

With reigning EuroLeague Women MVP Emma Meesseman on-song, it could be up to Gruda to slow her down.

But has Gruda still got the hunger? After all, she has seen it all before at the highest level, having played with the senior team for more than a decade.

It was a question raised last summer when she skipped the FIBA Women's EuroBasket in Prague, when her team had to settle for yet another second-place finish.

Thankfully for France, their headline act is back on board and making some serious noise. Her spectacular 9-of-10 shooting display in Wednesday's Quarter-Final Qualifications against Turkey returned 20 points and was the platform for victory.

"I played with a lot more determination and it was a must-win game, so I was motivated," Gruda pointed out. "We had a good game because we were a lot more consistent than against Canada. That allowed us to be more present for the full 40 minutes.

"Now, against Belgium, everyone is going to have to be present and be ready."

The return to the fold of Gruda was even more significant with the team having lost their legendary playmaker Celine Dumerc. This is the first major competition in recent memory they have played without her.

According to head coach Valerie Garnier, it means that the likes of Gruda needs to take a step up when it comes to leadership. And the play-caller was satisfied that against Turkey, her center was delivering along with the other members of an experienced frontcourt rotation.

"Yes, we had three of our veterans, three of our leaders, who did their part," she said. "Sandrine was 9 of 10 shooting in 22 minutes and so she doesn't need to play 40 minutes to have an impact.

"But she was also well assisted and seconded by Endy Miyem and Helena Ciak, who was efficient in limited minutes. They all showed the right example for the young players."

It will essential for Gruda and Co to continue in that vein if they are to get past a vibrant and confidence-fuelled Belgian side. 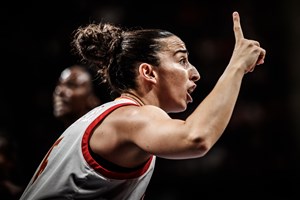 Quarter-Finals set in Tenerife - who will go on to win silverware? Vote Now 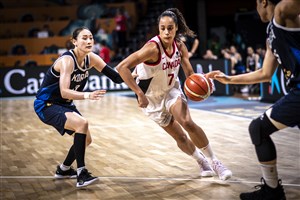