BOURGES (France) - Australia made it back-to-back wins on the weekend as they overcame Brazil 86-72 to qualify from the FIBA Women's Olympic Qualifying Tournament.

The result also secures a spot for Puerto Rico with a game to spare as Brazil miss out after failing to pick up a win from their three games in Bourges.

Turning Point: Brazil took the lead on a third quarter charge to move 55-52 ahead, but that would ignite a response from Australia as they hit back with a pivotal 20-4 spell across quarters. The gap was back to four points at 72-68 with 5:33 remaining before Brazil were held to a four-minute scoreless stretch which proved decisive.

Game Hero: Liz Cambage went to work once again for Australia with a game-high 29 points including 15 of 15 from the foul line. The Opals star also grabbed 7 boards and came up with 5 rejections in another powerful display.

Stats Don't Lie: Australia protected the paint with 7 blocks to zero from Brazil and they shot a higher percentage of their free throws with an impressive 27 makes in 30 attempts.

Bottom Line: It was a decisive clash with Olympic hopes on the line and Australia did enough to get the job done, despite not being at their best in Bourges. Brazil gave themselves a shot but were left chasing a ticket to Tokyo following their opening loss to Puerto Rico, who are now assured of their place ahead of their showdown with France. 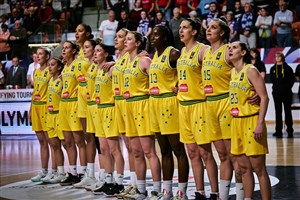