RIO DE JANEIRO (Rio 2016 Olympic Games) - The Olympic Games. Athletes dream of representing their country in them. Everyone wants to take part in the Opening Ceremony, to live in the Olympic Village. Players want to be a part of history.

Well, it's about to happen in Rio de Janeiro and once again, basketball will be a leading sport. Which teams are going to reach the podium? FIBA.com experts Jeff Taylor, David Hein, Enzo Flojo, Julio Chitunda, Paulo Kennedy and Dimitris Kontos give their opinions.

Jeff: The easy answer is the United States to get a medal but then, it gets a little complicated. Spain, France, Lithuania, Australia, Serbia, Brazil and Argentina are chasing the other two medals. I like Croatia, especially after their victory at the FIBA Olympic Qualifying Tournament (OQT) in Turin. They simply do not have a deep enough squad to compete for a medal. Lithuania have talent, experience and a great coach in Jonas Kazlauskas. They were downright impressive in their two friendly wins over Spain, including one in Malaga. I like Australia, especially if Andrew Bogut is healthy enough to bring it for at least 20 minutes a game. Aron Baynes and Bogut in the same squad? Australia can afford to cut Brad Newley? They must be pretty good. I like Brazil with the home support behind them. I like Serbia but think they're really going to miss Nemanja Bjelica. Carlos Delfino's 5-of-8 effort from the arc in a 79-74 win over Serbia on 30 July and 5-of-6 night in an 86-79 win over France suggests he's going to be a factor for Argentina. My gut says that Lithuania and Spain will join the USA on the podium but it's going to be a real dogfight.

Enzo: The USA is the easy choice for many to win the gold, and that's understandable. They have the deepest roster, one of the biggest in terms of size, and they are coming supremely confident. Mike Krzyzewski won't let his final tournament as the team's head coach end without a gold medal, that much is for sure. I would have chosen Spain had they been complete, but not having Marc Gasol is a big blow. That's why I'm picking Lithuania and Serbia to be right up there on the podium by tournament's end. Both European powerhouse teams have great size and depth in all positions, and they have a better balance of experience and youth compared to, say, France, Brazil and Argentina.

Julio: As much as I like watching Serbia and Lithuania play, I think Rio 2016 is going to be all about France, Spain and the United States. It might sound like business as usual considering that two of these three teams - Spain and the USA - have finished first and second at the 2008 and 2012 Olympics, but these are simply the best teams that I can see succeeding in Rio. However, they are likely to be challenged in the Group Phase. Even though the Dream Team factor was somehow under threat a decade ago, the truth is that the USA look stronger than ever. Even with the likes of LeBron James and Stephen Curry unavailable, they remain heavy favorites. And the numbers speak for themselves: since they were upset by Greece in the Semi-Finals of the 2006 FIBA Basketball World Cup, the USA have captured two Olympic gold medals (2008 and 2012) and two world titles (2010 and 2014).

David: Despite some people saying the United States roster is a bit weaker than at past Olympics, there is still plenty of firepower on board. And it really is a given that the Americans take a medal. The question is which medal, and it's not really a shocker to say the gold. That leaves two more and it's time to get a bit geeky. Looking at the competition format, it shows the second-placed team in Group A joining the Group B winners and third place teams on the non-USA half of the bracket - given that the Americans win Group A. So, France and Serbia look like top candidates for the second spot in Group A while Spain would avoid the USA until the Gold Medal Game if they win Group B. That plan could fall to pieces on the penultimate day of Group B when they take on Lithuania as the two Europeans seem to be the class of the group. But second place in Group B could meet the Americans in the Semi-Finals. Okay, enough already, let's have the picks … Quarter-Finals: BRA v FRA, AUS v ESP, LTU v SRB, USA v ARG. USA grab gold, Spain beat France in the Semi-Finals and lose again to the USA for silver and France take bronze by knocking off Serbia.

Paulo: While one bad day can end any team's medal hopes, I don't expect the USA to have such a day. They will have games when their shots aren't dropping, but their team defense and ability to turn that into points makes them incredibly hard to beat and they are deserving gold medal favorites. Spain are Spain. Some are writing them off because Marc Gasol isn't available, but Marc didn’t play last year and neither did Juan Carlos Navarro. That still worked out okay as they won EuroBasket 2015. The Spaniards are susceptible to that one bad day - as we saw at the 2014 FIBA Basketball World Cup after such a dominant tournament - but they are also very good at rising to the occasion and this is the biggest of all. It's France's time. They have such a brilliant mix of size, versatility, shooters, penetrators and role players, and they buy into Vincent Collet’s defensive mindset. Tony Parker is also a far more balanced international player than his early days when he tried to win games off his own hand, and with Nando De Colo beside him, the defense must place just as much emphasis elsewhere.

Dimitris: Technically, there is a possibility that the USA do not get gold, because after all 2016 is the year that saw Leicester City FC win the English Premier League title (in football), the Cleveland Cavaliers storm back from a 3-1 deficit in the NBA Finals and Iceland enter the UEFA Euro 2016 quarter-finals. But if this 2016 USA team does not win in Rio, the earth will be knocked off its axis and we'll all find ourselves wandering in space. As for the other two medals, you can never, ever write off a Spain team with Pau Gasol on it. Serbia appear to be in fantastic form and France have possibly the most balanced line-up among European teams. I cannot however shake the feeling that Argentina will step on the podium because in such a short tournament, their quality and defiant mindset trumps the fact the combined age of their star trio has passed the century mark.

Let us know your picks in the comments section! 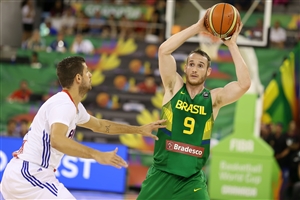 It's time for Brazil to dig deep