NEWCASTLE (Paul Nilsen's Basketball Worldwide) - I have no idea how I'm going to do the Power Rankings for Tokyo 2020 since this Olympic field might just be the most competitive ever.

As time evolves, I will give my opinion of how far each team might go. But as he dust settles on the FIBA Women's Olympic Qualifying Tournaments —which I thought worked well and were enjoyable— the thing that strikes me most, is that I see 10 teams that could make the 2020 Final.

Well assuming reigning champions USA will do it like always, that is a truly amazing nine different opponents they could face in the gold medal game. I won't bore you with reasons the USA can get there, so let's focus on those nine other nations and why they can dream big. I genuinely feel the race for the podium is wide, wide, wide, open. 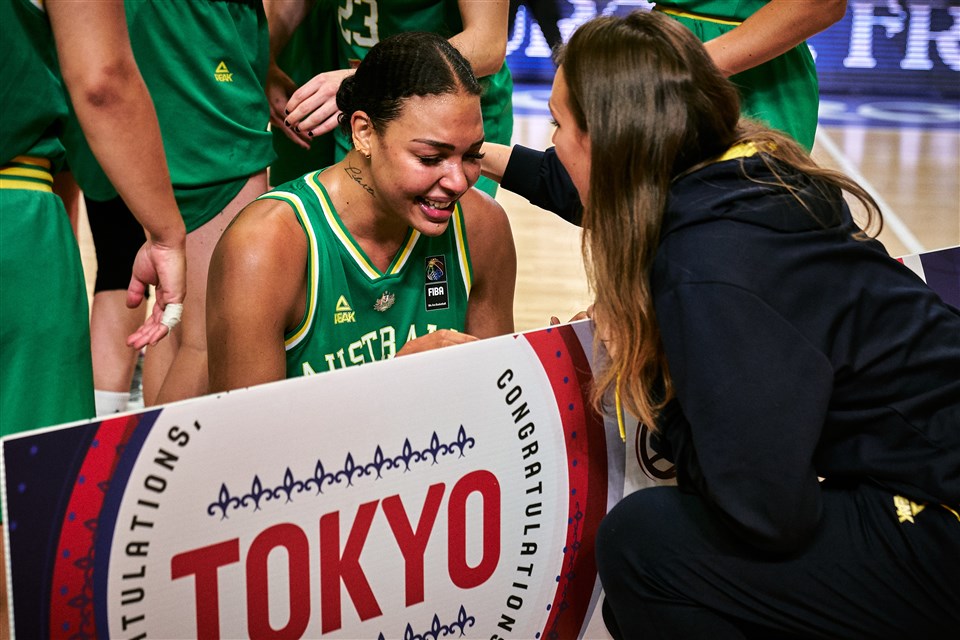 When you have the ultimate box-office player in Liz Cambage, anything is possible. She is a colossus and for those moaning about attitude, get a grip. You can't have it both ways. Just accept the personality and character along with the huge double-doubles. Or find someone who never flares up and gets you 10 points and 5 boards per game. The Opals have one of the best players in the world (arguably the best?), an elite coach in Sandy Brondello, proved themselves with second spot in Tenerife at the FIBA Women's Basketball World Cup, while in Bec Allen, have one of the most underrated, under-respected and under talked about players in the global game. Yes, they lost to France recently but they should roll deep in Tokyo. 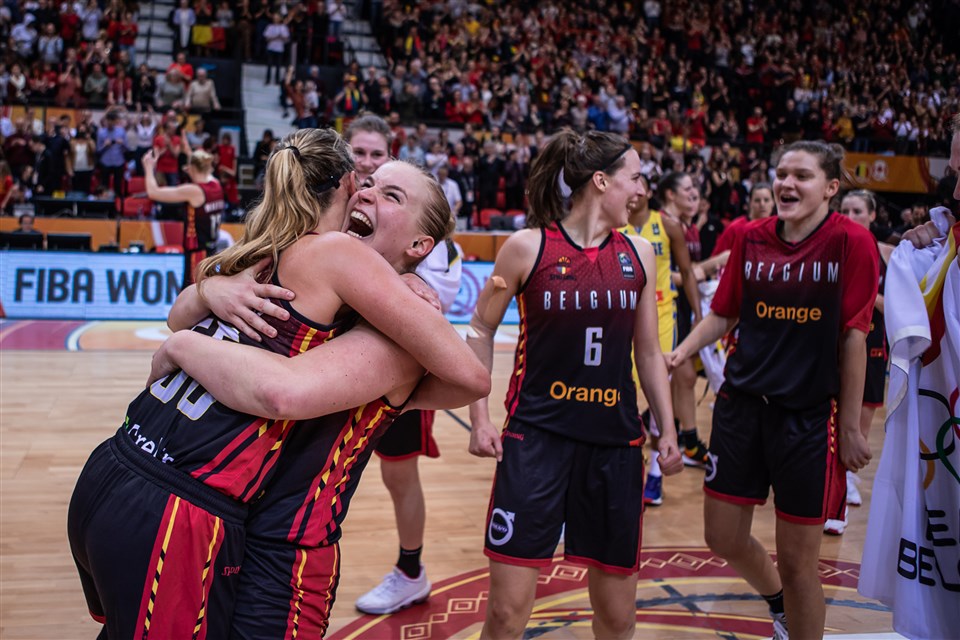 The first-timers could be absolutely anything. They could freeze and go out in the Group Phase. Or, if they get it right, from the start, I am telling you they are unstoppable for just about any opponent. They are basketball beauty personified as we witnessed against Japan recently in that classic match-up; and also at the FIBA Women's Basketball World Cup when they made the Semi-Finals in their debut I wrote about how they saved women's basketball (by showing how this sport we love can be played). They have a truly special player in Emma Meesseman, such a nice guard in Julie Allemand, a great shooter in Kim Mestdagh, while so many other players  continue to impress me, including the likes of Kyara Linskens and Jana Raman. I do think they're short in the backcourt, but they did miss Julie Vanloo. With her back, they would go up in my estimations even further. 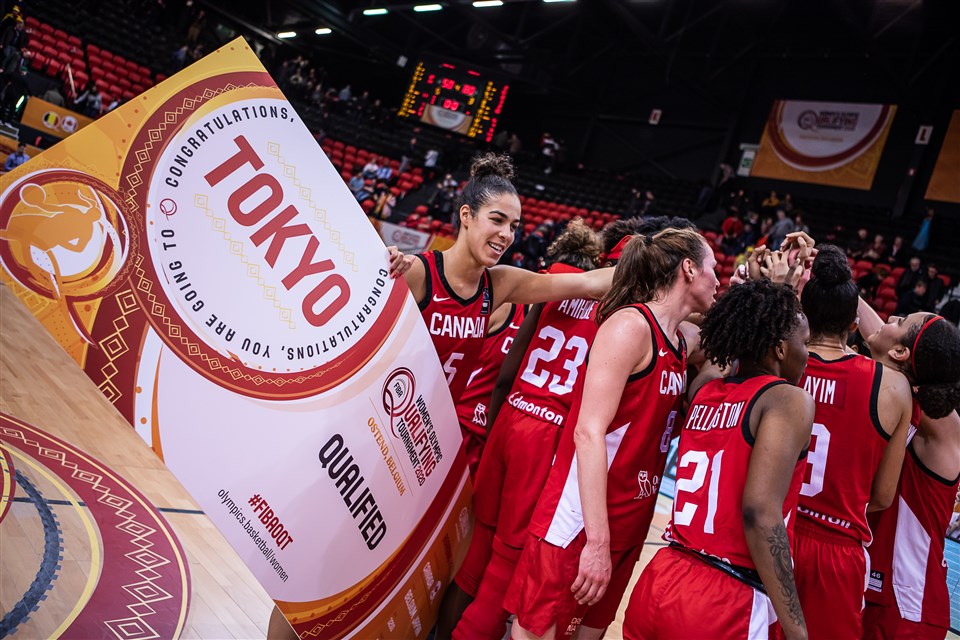 Always the Semi-Finals bridesmaid and never the bride, no more excuses for always going out in the Quarter-Finals of major competitions for Canada. Some people are now saying the Semi-Finals are a must. I agree. But they probably should get a medal and absolutely can get into the Final. Canada Basketball used to be so effective but always too 'vanilla' for me to be able to make that next step. But they seem to have a little bit more athleticism and dynamism now. Whether by design or circumstances, can just let the handbrake off a bit more.

I love Natalie Achonwa, while Nayo Raincock-Ekunwe, Miranda Ayim and Kayla Alexander for example, are reliability personified. In Kia Nurse they do have a top drawer guard and scorer who can be the difference-maker for them. But have they got the mentality to think big and to develop this team around more than just one player? Because they could if they wanted. They look a bit short in the backcourt at times, but team-wise and physicality-wise right through this roster, they are a tough assignment for anybody. They wear you down and are relentless. They also have some good younger players emerging with Bridget Carleton and further behind in development, Laeticia Amihere. 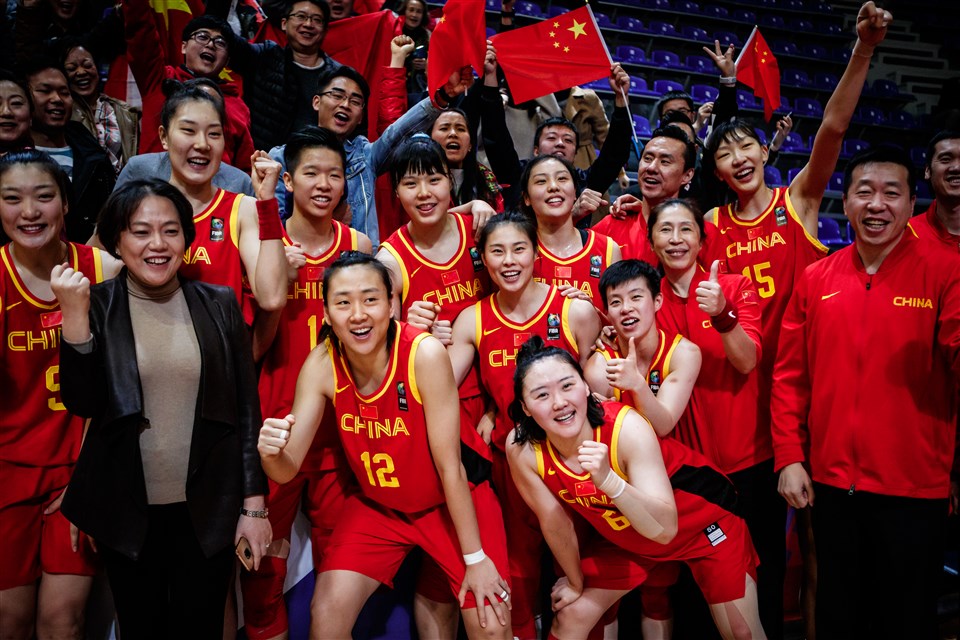 With all of the difficulties off the court in China with the coronavirus, I was so thrilled that the country got some happy sporting news with their qualification. And they did it in front of the legendary Yao Ming for good measure. Beating Spain sent a real message, as did going unbeaten in Belgrade. They have had their pride dented with the way Japan have taken over as the Asian powerhouse in recent times, plus Australia parachuting onto their patch from Oceania. But China are on the rise. Watching Xu Han and Yueru Li is so exciting having followed them from the youth scene. This team is seriously young with an average age of 24 years old. That is astonishing and I think they are the dark horses. I have some concerns, of course, but there are few reasons against them making a deep, deep run. 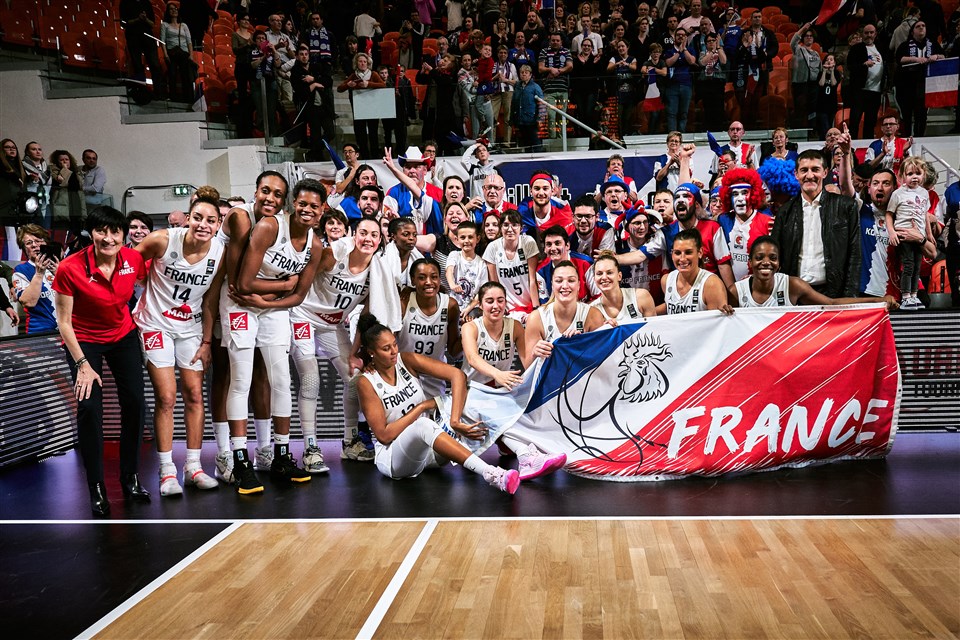 They may be perennial runners-up in Europe and they were second at London 2012 too. Well, they can dream of adding yet another silver medal to the collection because France have got game and some super players. The way they handled the pressure in Bourges at the Qualifiers and took down Australia was a great sign. I love the fact that the core of this team is so  young, with Alexia Chartereau and Marine Johannes basically making a wonderful trio with the veteran powerhouse Sandrine Gruda. There are other younger players like Iliana Rupert in particular also excelling, with the French clearly having an eye on Paris 2024. But they can fast forward their ambitions because the addition of Bria Hartley has been a game changer after that initial struggle the Federation had in filling the boots of the 2012 inspiration Celine Dumerc. The podium is surely a must in 2020. Why wait until 2024? 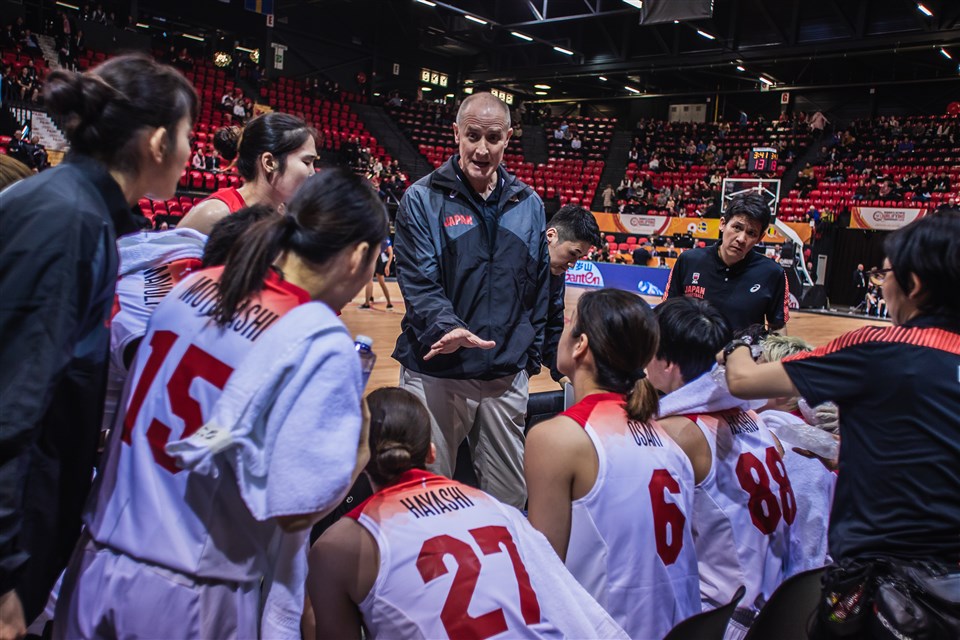 Time for some honesty. Japan making the Final would be a dream and something I would personally love to see. Not only because they are hosts so the spectacle and hype would be off the chart, but because I know the men's team are not highly rated and so all eyes will be on the women. When you add their fun style of high tempo and shooting from anywhere, but set within a team context, plus the fact they have some very skilled players like their leader Ramu Tokashiki, they have the capacity to deliver. They will be wanting a medal badly of course. Meanwhile I have admired head coach Tom Hovasse and his work greatly in these past few years. But meeting him recently face to face for the first time, means I have even more confidence they won't crack under the weight of expectation. They never give up and are absolutely relentless in every aspect. All the ingredients are there to deliver against expectations. Actually picking the final roster will be the biggest challenge as they run deep and especially in terms of guards and shooters! 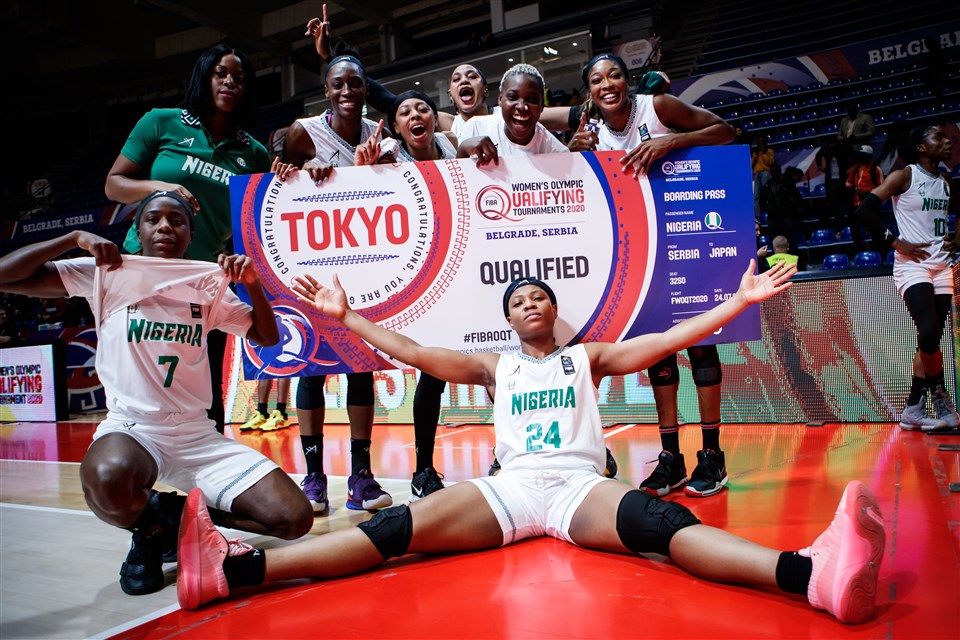 This would have been unthinkable only 18 months ago - an African nation making an Olympic Final? To some of you, I know it still will feel totally unrealistic. I do confess that of the nine nations, they are the least likely. But, I was there in Tenerife at the FIBA Women's Basketball World Cup 2018 when they made the Quarter-Finals. They showed it was not luck in Belgrade at the recent Qualifiers, while yes, only actually beating Mozambique, but pushing both Serbia and most notably, the USA hard. This is a serious group of ballers and now dominant in Africa after successive Women's AfroBasket titles, I expect them to continue evolving on the global stage. They have a very nice guard choice in Ezinne Kalu and Promise Amukamara, with Evelyn Akhator, Adaora Elonu, Ify Ibekwe and Victoria Macaulay all seasoned performers in leading European leagues and competitions. The way I look at it, the only thing stopping Nigeria making history is themselves. They must believe and even if not quite as much top-drawer talent as some of their rivals, they pack a punch collectively and can be a big fly in the ointment for many frontrunners. 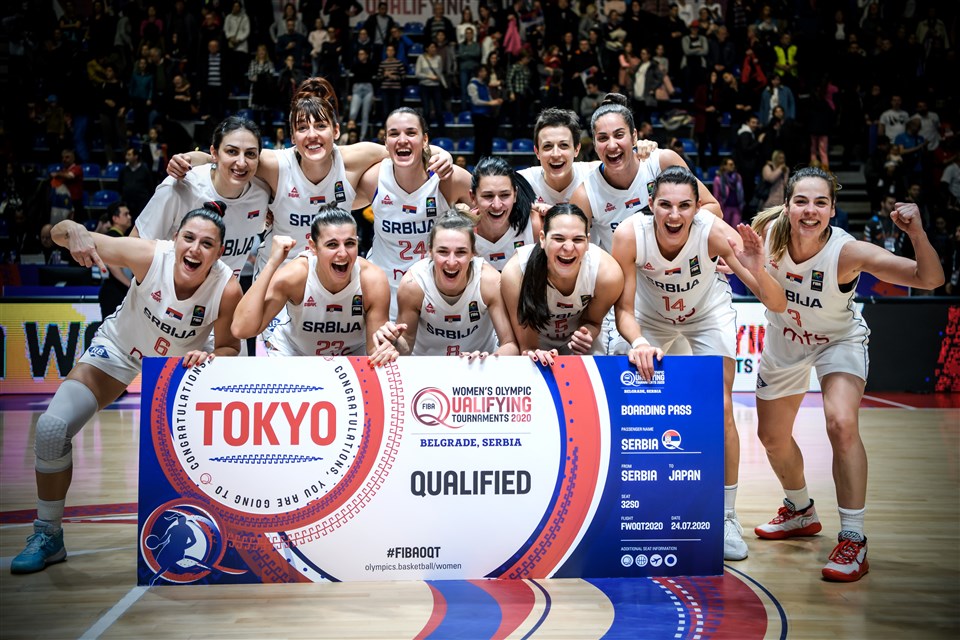 I predicted Serbia to push for the podium and to take a medal in Rio and it was largely met with raised eyebrows. But they did it and it had also happened in 2015 when I predicted some success at the FIBA Women's EuroBasket 2015 and they went on to win their first title. Five years later and it has been up and down ever since Rio. But, there is no doubt that when they get it right, Serbia are not a team you want to play. Sonja Vasic is a legend in my eyes, while Jelena Brooks and Ana Dabovic are always game-winners in waiting with their streaky scoring power. Adding a supporting cast with underrated performers like, Nevena Jovanovic and Tina Krajisnik for example, they must always be a considered a dangerous unit. Of course Aleksandra Crvendakic missed the Qualifiers and so she would also presumably be in the Tokyo mix. They have been looking at new players so have not been as impressive in these past years, but just still fight and defy the odds. Would I be surprised with yet another podium, even if they don't look quite as good as 2016? Not at all. 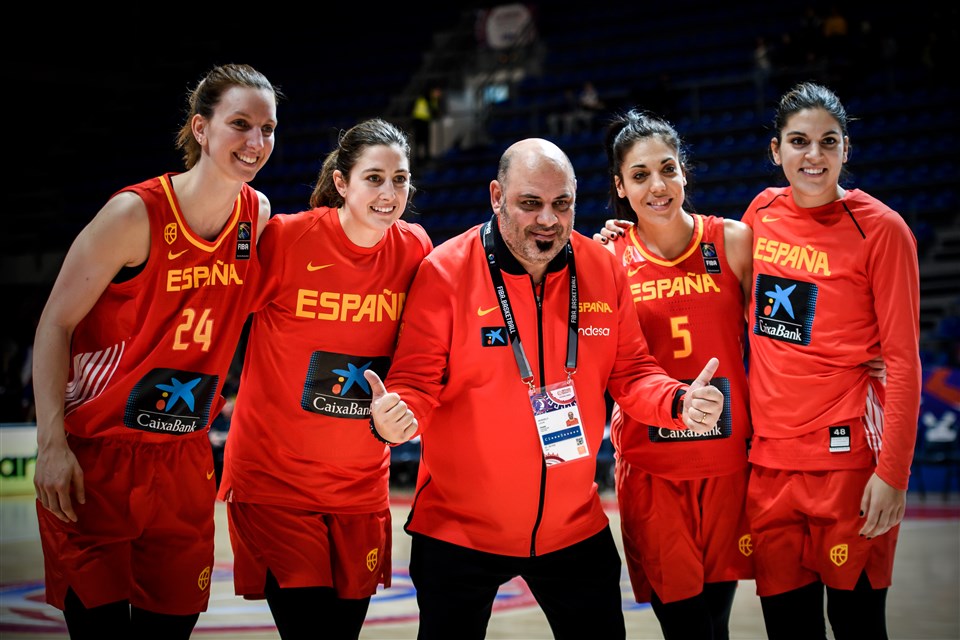 My MVP of Belgrade was basically the absent Astou Ndour. I am of course being cheeky here, but as Spain labored against China to defeat, you realized just how important she is to this team. Like Sancho Lyttle before her, Spain need a leading player in the paint who has the scoring capacity and shooting range to complement the tireless work of super warriors like Laura Nicholls and Laura Gil. Seeing Alba Torrens in the All-Star Five was great after she spent so much of 2019 sidelined with injury - and yet Spain still took gold at the FIBA Women’s EuroBasket 2019 without her. That speaks volumes about them and head coach Lucas Mondelo.

They have so much depth in the backcourt it is amazing to think that Anna Cruz didn't play in the Qualifiers but they still had Silvia Dominguez, Laia Palau, Cristina Ouvina and Marta Xargay to name but a few. Not bad right? Are they still one of the top three nations in the world? Probably. While my instinct is normally to go with a 'definitely', things are maybe more complex than previously. There is no doubt in my mind, that if they do make the podium and especially the Final, this would be their best achievement. It is always so hard to back against Spain and Coach Mondelo delivering!

Finally, as for the two nations that simply can't make the Final in my opinion, they are surely Korea and Puerto Rico. The former can shoot the lights out on any given night, but are too one-dimensional and inconsistent. Meanwhile Puerto Rico have made a dream come true with a debut slot, but will be probably have to be content searching for another slice of history and simply getting a first win on the board. Like Korea, they have 3-4 very talented players, but they don’t have the size or rotation to be a serious threat. 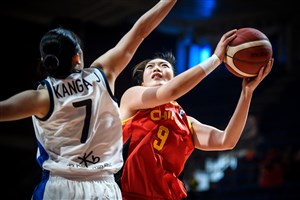 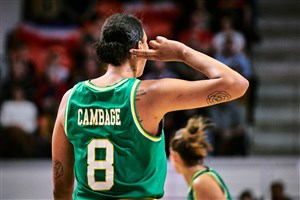 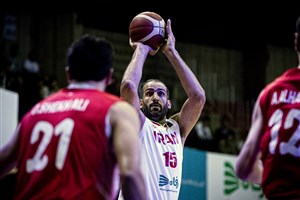 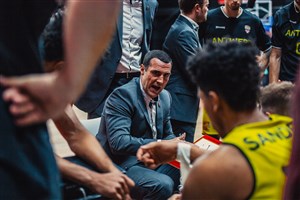