Neither, incidentally, was the coach when their team lost. Also, interestingly, 1998 was the last time that Kazlauskas was in charge of the Lithuanian team in FIBA's flagship event.

Krzyzewski, however, is aiming for his fourth successive triumph in international events – after gold medals at the 2008 and 2012 Olympics with the title at the 2010 FIBA World Championship in between.

The historical connection between the two coaches ends there.

Both of them however have very little to compare with between their current teams and the ones that played in the two previous match-ups.

Kazlauskas' success obviously came so long ago that most of those players are not even active anymore. And Krzyzewski has only Derrick Rose, Stephen Curry and Rudy Gay from 2010 continuing with him now.

The USA have swept all opponents that came their way so far at Spain 2014. But they may just have found their toughest opponent yet in Lithuania.

The Lithuanians have been rather calm and composed, with their only defeat coming against Australia in the Group Phase. But they may have to up the ante a little bit to get past the USA.

Both teams are superb to watch on the offensive end of the floor.

The combination of Kenneth Faried, Anthony Davis and James Harden is a joy to watch. So is the flow of the assault from Jonas Valanciunas, Renaldas Sebuitis and Martynas Pocius. Darjus Lavrinovic's three-pointers for Lithuania are as lethal as those of Curry for the USA.

The USA, however, surely look to have the edge - at least on paper - given the ability of their offense to grab the chances they are offered. There are loose ends yet on the defensive side of the court, but the manner in which they are constantly in attack mode - especially when grabbing rebounds or getting steals and leaving the opponents with little time to recover - makes up for those.

Lithuania may even slow down the game hoping to keep their errors to bare minimum while looking for the loopholes in the Americans' defense system.

Kazlauskas is a respected man in the world of international coaches for obvious reasons. But then Krzyzewski also boasts an incredible record.

The Palau Sant Jordi is set to stage a fitting finale to its hosting of the 2014 FIBA Basketball World Cup. 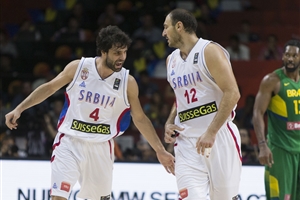 Krstic fighting off rust to help Serbs into Semis 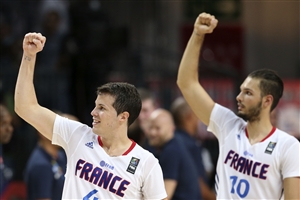