The USA, winners of the 2010 FIBA World Championship in Turkey, claimed their fifth world crown, pulling them even with Yugoslavia for the most in history. Yugoslavia are also the last team to repeat as world champions in 1998 and 2002. Brazil also accomplished the feat in 1959 and 1963.

Serbia secured their best placing under the Serbian flag as runners-up. Click here for the full game report.

Irving was rewarded for his impressive tournament and huge individual performance in the Final by receiving the Most Valuable Player award, presented by Tissot.

In Saturday's Third-Place Game, France bounced back from a rough third quarter just in time to scrape past Lithuania 95-93 for their best-ever result in FIBA's flagship event. Click here for the full game report.

The Group Phase was played in Bilbao, Gran Canaria, Granada and Sevilla (30 August-4 September), with the Final Phase staged in Barcelona's Palau Sant Jordi and the the Palacio de los Deportes in Madrid (6-14 September). 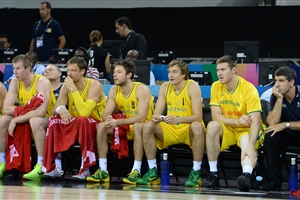