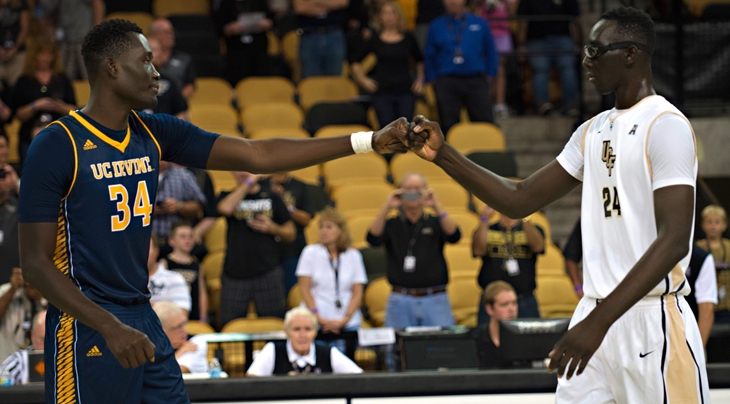 REGENSBURG (David Hein's Eye on the Future) - It was unofficially billed as the "biggest college match-up ever" or the "tallest game in history". Well, Mamadou Ndiaye and Tacko Fall both showed why they were the headliners.

University of California at Irvine versus University of Central Florida is not exactly the showdowns of legendary collegiate programs. Sure the thought of the schools' mascots going against one another is a bit amusing - the UCI Anteaters facing the UCF Knights.

But the game in Orlando received at least a little bit of national attention in the United States, mainly because of the showdown of the two big men from Senegal.

"Big men" is actually putting it mildly. Ndiaye and Fall are both 7-foot-6 (2.29m) - towering over everybody - well, except one another.

The 22-year-old Ndiaye - not to be confused with the former NBA center by the same name Mamadou Ndiaye - is a junior with the Anteaters who saw his NBA stock rise late last season by playing well against the Louisville Cardinals in the NCAA Tournament. He collected 12 points, 5 rebounds and 1 block in a two-point defeat.

Ndiaye, who arrived in the United States without knowing English, passed up putting his name in the NBA Draft after last season to return to Irvine. The big man attended high school in California and has continued to improve his game after never having played organised ball in Dakar.

The 20-year-old Fall, meanwhile, is a freshman at UCF who moved to the United States when he was 16 years old. Ironically he was first spotted by Ibrahim Ndiaye, the brother of the older former NBA player Mamadou Ndiaye.

Fall was reluctant but eventually switched from soccer to basketball. And upon arriving in the States, he dominated in high school in Tavares, Florida once he felt he could compete.

He was originally considered ineligible by the NCAA for this season but was cleared just before the Knights' opening game against Davidson. It was an additional burden Fall had to deal with before finally being cleared to play. And he collected four points, three rebounds and two blocks in his NCAA debut.

Fall's second game was the big one against his fellow big man from Senegal Ndiaye.

The two enjoyed meeting one another before the game, having never previously crossed paths in the past.

Both players are considered NBA prospects though they have slightly different skill-sets. Ndiaye is bulkier, more powerful and has more experience while Fall is more athletic and quicker.

Neither Senegalese put up great numbers in the UCI-UCF contest. Fall played 27 minutes and scored six points while making just 3-of-9 shots and missing both of his free throws, grabbing seven rebounds and blocking four shots. Ndiaye was in foul trouble and played just 19 minutes, scoring five points to go with two rebounds and one steal.

Fall got the better of Ndiaye right away, blocking Ndiaye's first two shots and running the floor well. He also had two dunks and a soft hook from the left baseline over Ndiaye. And the Knights' fan section were heard chanting: "He's big, he's tall, his name is Tacko Fall."

However, it was Ndiaye who ended up the winner in the encounter as his Anteaters prevailed in overtime 61-60. The UCI big man scored all three of their points in overtime, including a hook shot over Fall and the eventual game-winning free throw.

"It's a tough situation for both those guys," said Anteaters coach Russell Turner, who pulled his third grade son Darius out of school so he could travel with the team and watch the game live.

"The foul trouble was something that changed the rhythm and flow of the match-up, but I thought Mamadou won the match-up late and that’s why we won."

Turner was impressed though with Fall, telling Fox Sports: "That's no disrespect to Tacko. That kid's going to be really good. He's clearly the best player they have."

Fall was quoted after the game as saying it was a "good match-up".

"I've never played against someone who was even close to my height like Mamadou was. Now I can see how people feel when they play against me," he explained.

"I didn't know what to expect when I came into the game, but after those two (blocks), I was like, 'OK, I can guard him.' It just kept me going."

Before the game, Fall and Ndiaye talked with the elder Senegalese telling Fall: "He told me to work hard and keep playing and it's going to come along."

Something tells me this might not be the last time we see these two play against each other. It might one day be the "biggest NBA match-up ever" or the "tallest NBA game in history". 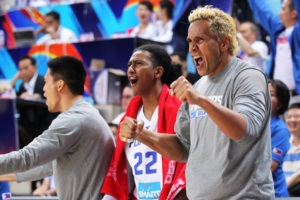 Rio update - who's making a claim? 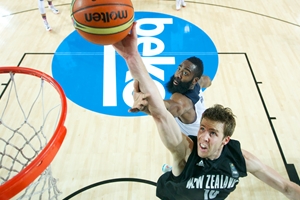