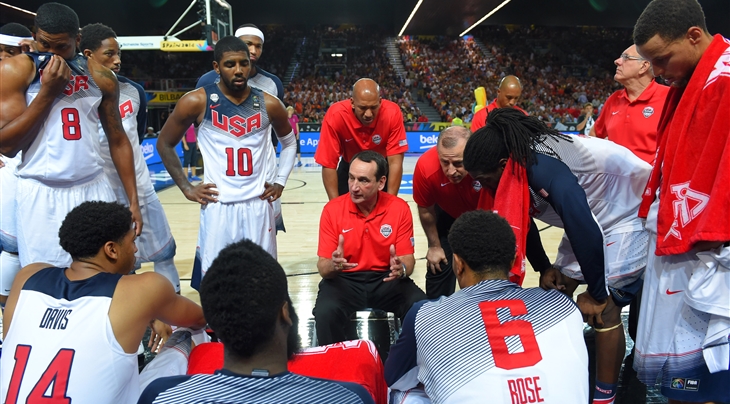 Krzyzewski spoke to FIBA.com on the eve of the USA's Quarter-Final game against Slovenia.

FIBA.com: What has your experience of Spain 2014 been like so far?
Krzyzewski: Well, the country is beautiful. The people have been great. When we were in Bilbao, what a beautiful city. So clean. The volunteers made it very special. We didn't have any problems whatsoever. And Barcelona is one of the most beautiful cities in the whole world. I have been here myself before a couple of times. And every time I feel lucky.

Basketball-wise, we faced really good competition. It's more open than people think. There are a lot of good teams.

My respect for the international community keeps growing every time I'm in a competition, because I see other countries playing so well. I see New Zealand. I see Finland with their huge support. They were two places away from being in Barcelona, or some place.

I see the international game continue to expand and get better. That makes it tougher for us. And that's good. - Krzyzewski

FIBA.com: Can you talk us through how it has been from 2006, 2010 and now… How has it been growing for you?
Krzyzewski: For us, we have tried to learn much more about international community. And we have learned.

I respect that it keeps us getting higher. And as a result our preparation is more intense. And our commitment to try to bring the best that we can bring, depending upon the availability of the players, to these competitions.

I think it is evident in the NBA game. About 20 percent of the NBA players are international, and more could be. But it's also true that a lot of international players have more high-paying jobs. And that's good because it means that the commitment to the game financially is not just going to the United States. It's going in other countries as well. And that's the way to make it grow. Because you don't want only the NBA to be great. We need basketball to be great everywhere.

I know that's what we feel. I hope that's the message we put across to the international community when we are with them.

FIBA.com: The 1992 Dream Team changed the way people perceived basketball. And since then, every time Coach K brings a USA team, the way people see basketball keeps growing and changing. What are your thoughts on the team here at Spain 2014?
Krzyzewski: I appreciate what you are saying. We understand our commitment as being one of the leaders in basketball to keep improving and keep respecting the game.

In 1992, we had 11 NBA Hall of Famers and coached by a great coach in Chuck Daly. With this group, I think it shows this is a younger group. This team is developing.

There's no one on this team who is at a level that they will be at when they reach their full potential as a player. Even (James) Harden and (Stephen) Curry. (Derrick) Rose was, but he was knocked back. I think this is a prelude to what could happen, and what might happen, when they develop as players.

FIBA.com: You said in one of the press conferences that you are a coach first and a not a fan. But at the bottom of it, all of us are fans first…
Krzyzewski: Well, I said I'm a coach first when I am in the tournament. I am a fan of basketball all the time. When I said that, I meant that I won't disrespect any opponent I'm preparing for if I'm watching everything else. It's like going sightseeing.

But when I'm a fan I watch everything. I watch the beauty of how Ruben Magnano has put together Brazil. How Spain is kept together. How the Greek team played during pool play. You respect all those things.

You got to see all of it in our group (Group C in Bilbao). In the play of New Zealand, Finland. Even the Dominican Republic. They advanced (despite) an injury to Garcia in one of the games. A lot of people are playing good basketball. 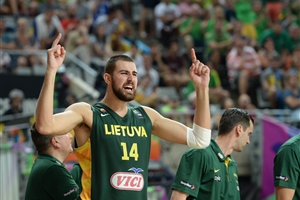