Turkey haven't played at the U19 Worlds since 2007, but that will change next summer in Greece.

Turkey knocked off previously unbeaten and overwhelming favorites Croatia in the Semi-Finals before getting the best of Serbia in the Final and become the first team to successfully defend the U18 title since Yugoslavia in 1988.

"It's great that we made the (FIBA U19) World Championship. This is a great group and we want to play against the best in the world," said Turkey's Egemen Guven, who was named MVP of the tournament.

Joining Turkey in qualifying for the U19 Worlds are Serbia (who have a title and two runners-up finishes in the past four editions of the European U18s), third-place Croatia (who have taken third at the U19s in 1999 and 2009), fourth-place Greece (who will be hosting the tournament), Spain (who are in search of their first U19 podium finish since winning the title in 1999) and Italy, who last played on the world stage in this age group back in 1995.

That sextet will likely play a role in determining the podium in Greece next year, if history is anything to go by. In the last four editions of the FIBA U19 World Championship, since its frequency changed from being played every four years to every two, European teams have collected nine of the possible 12 podium spots. The remaining three have all gone to the USA, who came in second in 2007 and claimed the title in 2009 and 2013.

These five European teams - plus Greece, who, as hosts of the 2015 FIBA U19 World Championship, already had their place guaranteed - join the quartet of FIBA Americas teams (USA, Canada, Argentina and Dominican) already qualified.

One usual contender at the U19s that will be missing in action in 2015 will be Lithuania, who lost to Italy in the qualification for the fifth place game. The Baltic team will miss the tournament for the first time since 1999 having won the event in 2011 and taking third in 2013.

Croatia and Turkey came into the U18 European Championship as favorites and Croatia for a while lived up that billing, winning their first seven games by an average of 23.1 points. They were led by a magical trio of youngsters, including Marko Arapovic, 17-year-old Lovro Mazalin and Dragan Bender, who won't turn 17 until mid-November.

The tournament was Bender's coming-out party as the younger brother of Ivan went for 34 points and 14 rebounds against Lithuania and was an assist short of a triple-double with 21 points, 17 rebounds and nine assists against Latvia.

But all the talent in the world could not help Croatia in the Semi-Finals as they suffered their first loss, 74-67 to Turkey. Croatia and the team bounced back in the Third-Place Game to beat Greece 75-71.

Bender, who will be starting a long-term deal with Maccabi Tel Aviv this season, shined yet again with 14 points, 10 assists and nine rebounds - just one board shy of achieving the first U18 European Championship triple-double since Lithuania's Martynas Andriuskevicius on July 11, 2004 - 18 points, 15 rebounds and 10 blocks against Israel.

Bender was named to the All-Tournament Team along with Guven, Serbian captain Stefan Lazarevic, Greece's all-around small forward Vasileios Charalampopoulos - who ranked third in scoring, fifth in rebounding and seventh in blocks - and Italian guard Federico Mussini, the leading scorer in the tournament.

Instead of Turkey and Croatia in the Final, the fans had the match-up in the Semis. And Turkey played a great defensive game, holding Croatia to a tournament low in points (67).

In the title game, Turkey met Serbia, who had reeled off six straight victories - including two against Greece.

Turkey jumped out to a big lead in the first quarter with Serbia coming back to trim the deficit to eight points early in the third quarter. But the Turks went on a game-changing 17-4 run to decide the outcome.

The Turks must wait until next summer to face the rest of the world as European champions. 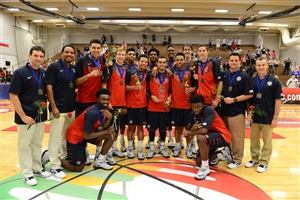 USA ease to U18 Americas title