Mou is among 11 inductees into the Hall of Fame this year together with two other fellow coaches: Natalia Hejkova of Slovak Republic and Bogdan Tanjevic of Montenegro. Mou and these other giants of international basketball were chosen from a list of more than 150 candidates.

Mou's contributions both to the growth of the sport and to the enrichment of Chinese culture has been undeniably tremendous.

He first learned the game playing on courts in his native Tianjin, all culminating in his being part of the country's first full Olympic delegation in the Berlin 1936 Games, where the 6ft 0in (1.82m) Mou was among the unmistakable trail blazers. Together with his teammates, Mou braved a 17-day journey by ship from China to Germany, with all his experiences at the quadrennial competition sparking his desire to jumpstart the development of the sport in his native land.

And so more than a decade after Berlin, Mou earned a graduate degree studying theories and gaining more knowledge about the sport he loved and that he knew his compatriots could also love as fervently as he did.

Mou would then lead a revolution in Chinese basketball that would result in their meteoric rise in the realm of Asian hoops, where China would reign as kings of the court for the better part of the 1980s until the early years of the 21st century.

As a coach of China's national teams, Mou's body of work is unparalleled, as he's coached at practically every level both for the men's and women's squads, establishing China's place as the most dangerous Asian team from the mid-20th century onwards.

At age 43, Mou ascended to become Vice President of the Chinese Basketball Association (CBA), eventually becoming President when he was 60 years old. His impact on Chinese basketball has been felt so strongly that he was selected to be among the 50 greatest basketball contributors of China while the CBA even named their top tier professional league's championship trophy after him.

Upon being inducted into the Naismith Basketball Hall of Fame in 2016, Yao even talked about Mou.

"I want to mention Mr. Mou Zuoyun, who is a legend," Yao shared. "He once came to Springfield to study basketball before returning to China and gave his whole life to basketball."

Mou's initiative and desire to raise the level of play in China resulted in their unabashed dominance in Asia, highlighted by three appearances at the Olympics. With Mou's direction and influence, the CBA enjoyed unprecedented success in the Asian basketball scene, winning four Asian Games gold medals in addition to constantly representing the continent in competitions at the global level.

His contributions to the growth of Chinese basketball have indeed been quite extraordinary, which is no wonder why he became a Lifetime Honorary President of the Asian Basketball Association in addition to being widely considered one of the 'founding fathers' of Chinese hoops. 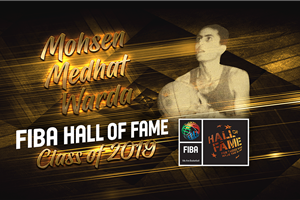