CHALON-SUR-SAONE (LNB Pro A) – There was a happy ending in store for Elan Chalon after all, as the FIBA Europe Cup runners-up wrapped up their season by celebrating their second LNB Pro A championship title in the history of the club.

In a series that went the full distance, Jean-Denys Choulet's side converted on their home court advantage to come out on top 74-65 in the decisive Game 5 of the Finals, to close the curtain on a long European club season.

Jeremy Nzeulie continued his heroics for Elan Chalon in the gold-medal series by leading the winners in scoring with 14 points en route to a well-deserved Finals MVP award, while Cameron Clark chipped in with 14 points and 10 rebounds.

Axel Bouteille chipped in with 9 points and iced the game in the final minute with a dagger corner three-pointer to give Elan Chalon a safe 12-point lead.

The usually consistent John Roberson and Moustapha Fall had relatively quiet performances, but another outstanding Nzeulie performance got the job done for the hosts in front of the Chalon faithful.

"We often talk about the trio of Roberson, Clark and Fall, but tonight Bouteille and Nzeulie were our best players," coach Choulet said after the victory. "I don't think we could have done it in Strasbourg. Our fans were just phenomenal."

The 26-year-old guard Nzeulie had already come up big and made his presence felt for the Chalon-sur-Saone club with an unbelievable game-winning buzzer-beater in Game 3 of the series that allowed Elan Chalon to go up 2-1 in the series.

"We had an extraordinary season and we want to make a mark in the club's history with this team. We needed a title, so in the aftermath of the defeat in the FIBA Europe Cup Finals against Nanterre, I told the guys we can still become champions on France," said Nzeulie, who stepped up at just the right time.

Meanwhile, heartbreak was the code word for Strasbourg once again. Having reached the Finals for the fifth season in a row in the LNB Pro A, coach Vincent Collet's side could not lift their curse, as they come up second best in all five appearances.

Elan Chalon's triumph in France completed what turned out to be a successful Play-Off marathon for FIBA Europe Cup teams on domestic fronts, with teams claiming national titles in nine different national championships. 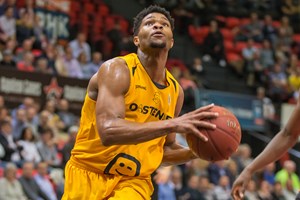