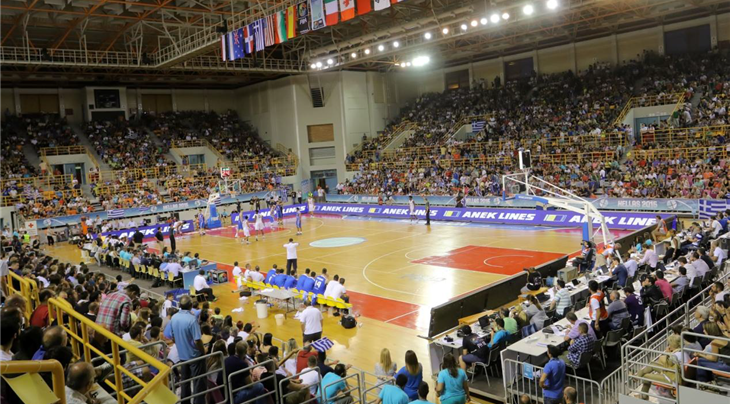 The new arena is located in a district called Dyo Aorakia, in Heraklion. It is east of the city center, near the industrial area and the airport. The arena's construction commenced in 2003 and finished in 2007. Τhe capacity of this new arena is 5,222. It has hosted friendly games of the Greek men's national team as well as the Greek Cup Final. It may host all indoor ball games (e.g. basketball, volleyball, handball etc), as well as gymnastics.

This arena belongs to the University of Heraklion campus. Its construction was finished in 2007 and its capacity is 1,080.

Chania | Kladisos Hall | Groups A & B

This arena is located in the city of Chania, in the western part of Crete, about 2 km west of the city center and near the sea. It is built near the stream of Kladisos. Its construction started in 2002 and its capacity is 2,400. This arena is also used for volleyball and handball games.

This arena is located in the city of Rethymno, near the city center. Its construction was finished in 1992, its capacity is 1,600 and it is named after the famous Greek actress and politician Melina Merkouri. The Final Phase of the FIBA U16 European Championship 2007 was held at the arena, which is also used by AGO Rethymno in the A1 Greek Basketball League.