MUNICH (Germany) - Alina Iagupova has been rewarded for a sensational first season at Fenerbahce Oznur Kablo by being named the official EuroLeague Women MVP.

The Ukrainian star was the runaway winner as she landed the headline prize of the first-ever official EuroLeague Women Awards,which have been introduced to recognize and celebrate the best players and coaches from the Regular Season.

Lighting it up throughout the campaign, Iagupova was the top scorer in the competition with 21.3 points per game on 50 percent floor shooting. She also highlighted her importance and influence with a superb 5.7 rebounds and 5.5 assists per outing.

Having already secured her place in the All-EuroLeague Women First Team, she had to fend off competition from Emma Meesseman of UMMC Ekaterinburg and Alyssa Thomas of ZVVZ USK Praha who shared runner-up honors.

The voting for the EuroLeague Women Awards took place over the course of a five week period spanning March and April, with nearly 20,000 ballots cast in each of the six different categories. 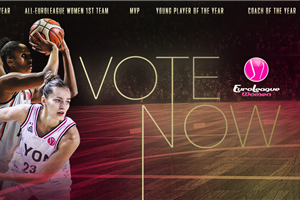