After more than a decade flitting between the disappointment of campaigns spent in the old second tier of Division B, as well as multiple failed attempts to make it to the Final Round, the narrative has finally changed for the better.

As the captain of her country and as a role model who has been through every possible emotion, Erkic probably had every right to appreciate it more than anybody else when Slovenia cemented a Final Round spot for the first time.

Rather fittingly, the 31-year-old top-scored for her team with 16 points as they notched a comfortable 75-54 win against Lithuania to make history.

Once the initial scenes of euphoria had quelled slightly, she was trying to come to terms with her nation hitting new heights.

"I just want to pass my congratulations on to my team-mates," she enthused.

"We feel amazing after such a big success for Slovenian women's basketball and my own satisfaction is even greater because I've been with the national team from the beginning and we have wanted to qualify for a big competition for so long.

Still unbeaten and heading to Latvia with every chance of finishing as group winners, credit has also rightly been lauded on head coach Damir Grgic who is not taking his foot off the gas just yet.

"I am impressed by our matches and the qualification period," confirmed the play-caller.

"But now we will do everything to finish the qualification in first place in the group and we really want to win in Latvia.

"I am proud of the girls and would like to thank them. We also have the best fans in Europe and while it was known already in men's basketball, it is now also known in the women’s game," concluded Grgic.

Meanwhile, whether they are subsequently confirmed as group winners or not, Slovenia certainly look like they won’t just be tourists in Czech Republic next year, looking to enjoy a Final Round adventure.

Indeed, they could end up being something of a dark horse if they avoid injuries to key players. 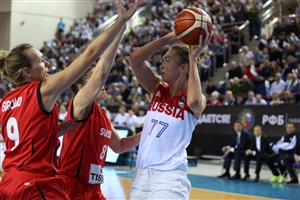 Memnun relieved as Turkey pass a major test of character 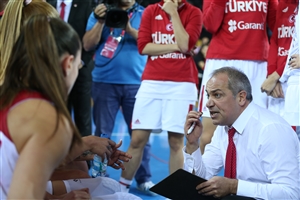